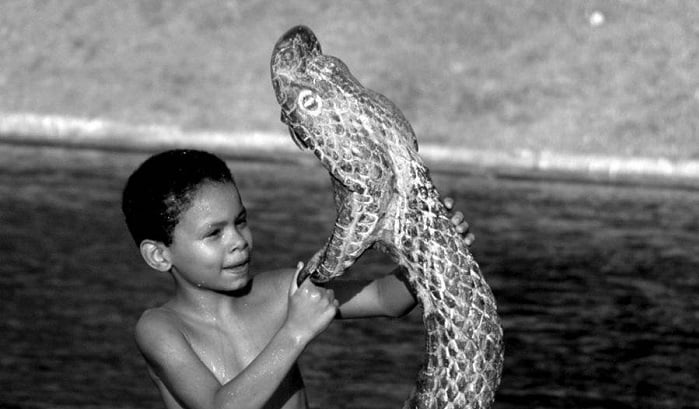 Kids in the first world have it so easy, their toys are really safe. Even their countries’ laws ban certain toys that can be potentially murderous playthings. Hence, that is probably why a lot of people were shocked after seeing a kid from the third world play with the most dangerous playmate ever, a snake so big it looks like it snuck out of the “Anaconda” movie set.


An unnamed kid from Thailand has been a subject of a parental guidance debate after a video of him playing with a snake went viral. The snake appeared to be a boa constrictor which was probably more than 20 feet long given its girth. However, despite being one of the deadliest hunters in the wild, it appears that it poses no threat to the kid. Here’s the video, take a look:

Haters might say that the snake was an actor. It also appears to be too large to be kept as a pet and is more likely a wild snake. So why did it not hurt the child who was wrestling it? Maybe it was full, or maybe they were friends and the snake did not feel threatened by a child. It is also worth noting that snakes like those are quite ubiquitous in places like Cambodia, Thailand, and Indonesia, so children in there are used to them and even hunt them bare-handed like professionals, something even fully grown adults in other countries could not imagine doing:

Those are constrictors and pythons by the way, not poisonous but can cause a bad flesh wound with their bite and can strangle anyone dead with ease. They seem to be no match for the children though.

Mom Spots Deadly Snake Next To Baby In Family Photo, Freaks Out

The Blood Test, The Swab Test, and The Saliva Test      Essentially, there are three general types of COVID-19 testing produced so far. One is the rapid test, the second is the saliva test and the other is the swab test. The rapid test (also known as the anti-body test) uses blood samples. The swab test… END_OF_DOCUMENT_TOKEN_TO_BE_REPLACED

The COVID-19 pandemic is one of the biggest modern pandemics known in history. Currently, there are more than five million confirmed cases in the world, with a total of 333,000 deaths. A total of 1.6 million of these confirmed cases are in the US alone. The world is currently in a race of finding a… END_OF_DOCUMENT_TOKEN_TO_BE_REPLACED

Despite concrete data and research, people’s opinions will always be diverse when it comes to a variety of topics including religion, politics, gender, and more. Denial is a common reaction to many important discussions and serious world events. The COVID-19 pandemic does not differ from any issues and is subject to opinions from critiques all… END_OF_DOCUMENT_TOKEN_TO_BE_REPLACED

Back in January, when the Wuhan, China coronavirus broke out, it didn’t make it to the front page of newspapers, in print or virtual form. Today, January feels like a lifetime away. Like it or not, people around the world have adapted to the new normal – staying at home, frequent hand washing, and social… END_OF_DOCUMENT_TOKEN_TO_BE_REPLACED

Since the beginning of the year 2020, the whole world has been stupefied by the rapid spread of a deadly coronavirus known as COVID-19. World superpowers in the West were unable to prevent the virus from reaching their borders. Because of this fact, the novel coronavirus COVID-19 became a world-wide pandemic no less than three… END_OF_DOCUMENT_TOKEN_TO_BE_REPLACED

For months since the start of 2020, the attention of the world has focused on immediate response efforts to contain and combat the novel coronavirus, also known as COVID-19. The deadly virus has pushed millions of people into isolation.  This kept people in their homes for weeks and months away from their work, their friends,… END_OF_DOCUMENT_TOKEN_TO_BE_REPLACED