Nike Stock Plunges As Rednecks Refuse To Buy One Pair...

Colin Kaepernick’s recent establishment as the newest Nike mascot was bound to ruffle some feathers. He is a highly skilled athlete, sure, but he is better known as the face of the still-ongoing and somehow-controversial protest among NFL players against the many grisly killings of young black men by white police officers who rarely face any consequences for their actions.

You have most likely heard of him through your strident Republican relatives that you only follow on Facebook for appearance’s sake. The American right has been in an absolute tizzy about how “disrespectful” this form of protest about a critical issue is. Recall that these are, of course, the same people who think that any media which is not about them is actively advocating against them, and for the genocide of the white race besides.

Veneration of the American flag as a faultless symbol of national perfection must now be taught in redneck schools. No longer is it a potent symbol of a mixed national identity that has often acted more as an emotional lightening rod for acts of protest. No, today it is a representation of FREEDUM and MURICA and if you don’t like what my hyper-targeted tee shirt says about that, you can just leave!

So obviously by not standing for the (anachronistic and out-of-place) flag worship portion of the American Football Game, Mr. Kaepernick clearly intended to personally shit in the Cheerios of every white man in the country. 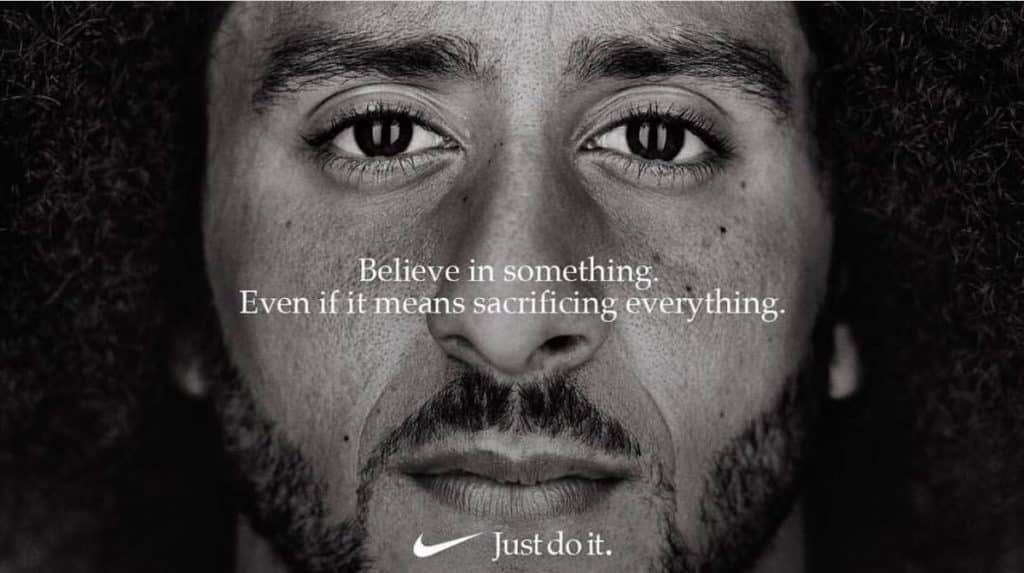 It’s hardly as if Colin Kaepernick is following the well-worn playbook of past civil rights leaders by employing quiet, dignified, non-violent protests to persistently draw attention to a major cultural issue. Our nation definitely doesn’t have a national day to honor the death of one such figure, or a history of venerating such a civil rights leader about one notch below the American flag. Kaepernick is a trailblazer, truly the first black American to think of quiet opposition as the most effective means of generating change on deeply-entrenched issues of race in America. Kaepernick’s actions are utterly unprecedented, and no person could seek guidance from historical parallels. We should have a month of the year that specifically celebrates that kind of important work and the oft-ignored history of people like Kaepernick.

Well, a girl can dream.

Our Soundman just cut the Nike swoosh off his socks. Former marine. Get ready @Nike multiply that by the millions. pic.twitter.com/h8kj6RXe7j

Nike, of course, picked a fight with the wrong bear! You don’t mess with fat intolerant rednecks/Russian hackers LARPing as the same. That dude doesn’t even care if his socks stay up, he’s a mad man!

Just like the NFL, whose ratings have gone WAY DOWN, Nike is getting absolutely killed with anger and boycotts. I wonder if they had any idea that it would be this way? As far as the NFL is concerned, I just find it hard to watch, and always will, until they stand for the FLAG!

Enraged and engorged, those same cranky rednecks took to social media en masse to express their disapproval with Nike for daring to express an opinion on a topical cultural issue, Nike stock must have plummeted. How could the brand survive without their all-important Ignorant Redneck demo? After all, these crucial customers might buy one pair of Nike Airs a decade, or pick up some discounted Nike socks at Dick’s or Modell’s. Truly they are the backbone of this titan of industry, this bright star of American commerce, and Nike owes all of their success to surly, racist dickwads who burn stinky-ass old shoes in public because of an advertisement they dislike.

How will Nike move forward without their support? I guess they will need to start courting the interest of black Americans to make up for this surely gigantic loss. Maybe Nike will get lucky and suddenly discover that their brand just so happens to have deep affinity and connection within black urban communities, which they’ve accidentally built up over the years, where people will buy multiple pairs of expensive shoes a year and eagerly express their affiliation with a brand that has come to represent triumph over hardship and endured as a symbol of personal success and timeless style. Perhaps Nike will fortuitously discover that this very advertisement that drove away the Grumpy Racists demo just so happened to, purely by coincidence, further embed their brand in the cultural fabric of black American communities. It might even be seen as a clear signal about how Nike plans to conduct their marketing going forward, and where the company sees the most important opportunities for sustained growth.

Well, a girl can dream.