Wiccans Are Accusing Sephora of Cultural Appropriation Over Their New...

Autumn is finally here and that can only mean one thing – the countdown to Halloween has begun!

And although we’re looking forward to horror movies, scary costumes, and and a guilt-free candy binge sesh, the annual celebration of all things spooky means stores will soon be hawking anything with a ghost or pumpkin on it.

In fact, beauty chain Sephora has already begun doing so, with the release of their new “Witches Starter Kit.” As well as perfume, the package contains stereotypically witchy items such as sage, tarot cards, and a rose quartz crystal.

Unsurprisingly, Wiccans aren’t amused at their religion becoming a selling point for cosmetics, and have accused the French beauty giant of cultural appropriation. 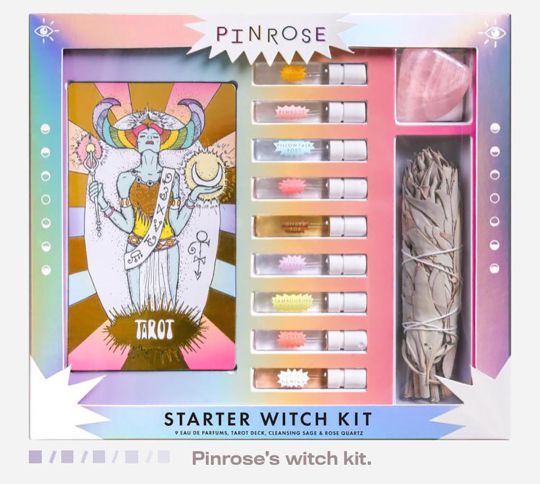 “Although most witches do use what’s in the Sephora box, most of us feel that it’s wrong for just anyone to grab those things and be like ‘oh hey I’m a witch now’ because it’s sacred to us.”

Sephora selling “witch kits” actually makes me really upset. Witchcraft isn’t something you just throw around, people put their entire being into this way of life and work so hard at it. I’ve been made fun of way too much for being a witch for it to just become another trend.

How hard is it for people to grasp. #Wicca is a legitimate religion like Christianity. It’s not a joke so I don’t get why @Sephora thinks that a “Witches Starter Kit” is remotely okay to sell? Where’s the “Christian Starter Kit” or the “Jewish Starter Kit”?

Witchcraft IS NOT a joke or a game. @sephora is going to have ppl trying to conjure up circles with fragrances which seriously puts people in danger. I wish they would have educated themselves FIRST before funding this offensive project…

Being a witch is fashion ??‍♀️

Go support your local spiritual shops. Don’t give money to this bullshit and do your damn research. I’m appalled. https://t.co/tspQJTXww7

In light of this disturbing Sephora witch kit fiasco, please comment below if you are someone who sells and/or makes products for use in spellwork, witchcraft, and other occult practices and I’ll give you a promo!! I want people interested in witchcraft to buy from good sources

Modern “witchcraft” as practiced in the Western world is largely based on cultural appropriation ,, you all were the ones who took and twisted indigenous culture to make it a white ppl trend, so cry harder https://t.co/PUPFBedbNq

i’m all about trash talking sephora witch kits but don’t act like half of y’all didn’t get into spirituality and any of this stuff if it wasn’t for the capitalistic market for it and the initial aesthetic interest.

The controversial beauty kit may not be magical, but it has led to some important discussions around race and culture (instead of just making people smell nice).

Horror Hotel Room Now Available In Japan; Are You Brave Enough To Stay There?

Witches of Brooklyn #HexTrump for Defeat