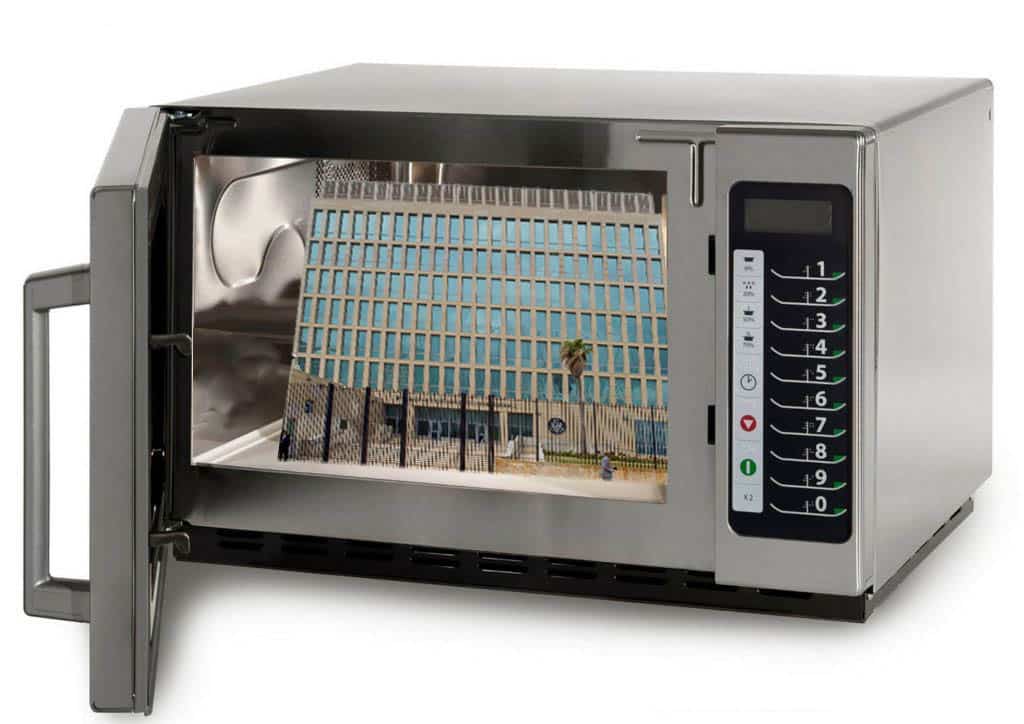 Like your still-cold-yet-somehow-molten Hot Pocket, U.S. Embassy workers are being tortured with microwaves.

Sadly, no one stealthily constructed a giant Kenmore around the U.S. Embassy. Rather, the workers are being blasted with microwave radiation from… well, we’re not totally sure where it’s coming from, actually. It’s apparently a little difficult to pinpoint the source of the microwaves. We are also not sure why this is happening, and there’s definitely been some back and forth about the cause of the embassy-wide aural hallucinations, headaches, and extreme fatigue.

But now it seems like it’s definitely microwave radiation, and it’s for-real serious too: the as-yet-unfailing New York Times reports “sonic delusions and very real brain damage” among embassy workers and their families exposed to the effects of the microwaves. The Guardian agrees: “The victims reported hearing intense high-pitched sounds in their hotel rooms or homes, followed by symptoms that included nausea, severe headaches, fatigue, dizziness, sleep problems and hearing loss.”

While Cuba has not admitted any kind of role in these attacks, the United States did kick 15 Cuban diplomats out of D.C. last September and recalled half it’s Cuba-based diplomatic staff. That definitely smacks of some back-channel complaints about what’s going on in Cuba. Even if the U.S. isn’t formally pointing the finger, it is doing a great impression of what it would do if Cuba blasted its embassy staff with microwaves.

It does, however, remain unclear why someone would want to cause brain damage to diplomatic staff. These people are hardly relevant to international espionage: they’re purely middleman. They negotiate the minutiae of trade deals and approve visas, but they aren’t smuggling state secrets. Blasting them with microwaves is the kind of needlessly complex plot you’d find in a James Bond film, or even an Austin Powers parody.

It’s also ludicrously ineffective as a weapon. In a world with polonium-tipped umbrellas and, you know, guns, why would you want to give people bad headaches and auditory hallucinations en masse? What would even be the point? Do they just want to annoy the hell out of them?

I like to imagine a scenario in which some Cuban el doctor Frankenstein got delusions of grandeur about how effective his evil microwave ray would be. And then in the testing stages, it turned out to be only annoying, rather than face-meltingly deadly. Imagine the embarrassing committee meetings after that let-down. Poor el doctor having to defend his mediocre microwave misfire against the legendarily stern gazes of Cuba generals. As a doomsday device, it earns a distinct C-minus.

Could the point be to ruin the warming relationships between Cuba and the United States? If so, the shady actors running this job could claim victory. The growing friendliness between the two nations begun by President Obama has disappeared. The United States has issued a travel advisory, the brand-new tourism industry has plunged, and regular Cubans are shut out of the United States diplomatic process. So I guess if you wanted to make everything worse, your wish has come true!

But What If It’s a CONSPIRACY!

That would be a lot more fun. It might also be that the whole thing is a load of crap. It could be that the United States’ present administration is using the “attacks” as a pretext to undo the previous president’s actions.

Marco Rubio, perennially disappointed candidate for president, has pushed hard for labeling this as an attack, and Donald Trump has expressed no fondness for Cuba. Rubio has specifically linked the attacks to Russia, but that’s mostly so he could talk about how much he hates Russia. It could also be mass hysteria, a physical contagion, or a particularly poisonous Cuban sandwich. The world is a large and strange place. It could be a particularly odorous cleaning product.

The problem is not even that there are not enough people in the diplomatic corps to handle the sudden influx of whatever from Cuba. It’s more the signal it sends to Cuba: the United States doesn’t trust you and will use any cover to knock Obama’s political achievements years after his exit from office.

Gift-giving isn’t just a seasonal affair between friends, families and acquaintances. The art of gift-giving is also conducted on a national scale with countries often sending each other big, weird and expensive gifts. Experts in all things gifts, Vanilla Reindeer put together some examples of these expensive and odd gifts that have been shared between… END_OF_DOCUMENT_TOKEN_TO_BE_REPLACED

There are lots of ways you can make Pres. Trump feel welcome: you can offer him coffee, or mow a penis into a field for him to view as his plane lands. The willie in question has been chopped by Born Eco ahead of the arrival of President Trump, who visited the UK Monday for… END_OF_DOCUMENT_TOKEN_TO_BE_REPLACED

The year isn’t even halfway over, yet Donald Trump has managed to make a fool of himself and our country countless times. From inviting the national college football champions, the Clemson Tigers, all the way to the White House for some McDonald’s to his to the dreaded results of Mueller’s investigation, it has been one… END_OF_DOCUMENT_TOKEN_TO_BE_REPLACED

Republicans have always said that when they gained control in Congress, they would work to overturn Roe v. Wade and here they are, cashing in on that promise one state at a time. So far, Alabama, Arkansas, Georgia, Kentucky, Missouri, and Ohio have all passed incredibly restrictive laws on abortions, making it illegal for women… END_OF_DOCUMENT_TOKEN_TO_BE_REPLACED

If you’re on Snapchat, then you’ve probably played around with (and were likely horrified by) their filter gender swap filters. While you’re probably using these filters to send hilarious pics to your friends, some guys using them to create Tinder profiles. What likely started out as a joke has quickly evolved, and these guys are… END_OF_DOCUMENT_TOKEN_TO_BE_REPLACED

“Milkshaking” is a hilarious trend in Britain where a milkshake is thrown at and ideally lands on a far-right politician or activist. The point of this nonviolence protest is to humiliate them without causing injury. Physical injury at least. There’s no doubt that milkshaking has led to a few bruised egos. Not only is this… END_OF_DOCUMENT_TOKEN_TO_BE_REPLACED