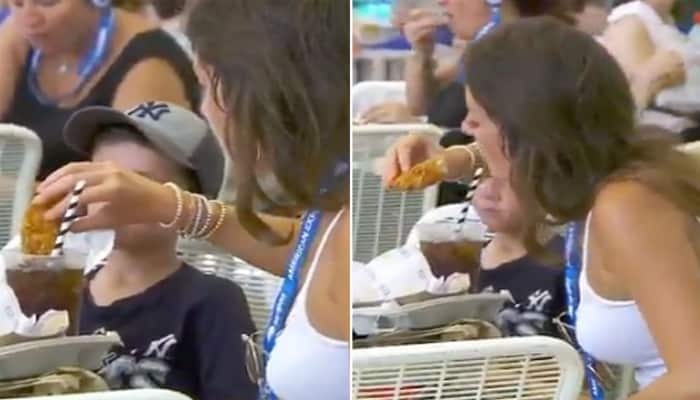 However when one U.S. Open Tennis spectator was filmed integrating the two, one thing was transparent: Americans are not ready to make this a trend anytime soon.

In the footage, aired on ESPN, a woman sitting at a table with two boys takes a big lump of battered chicken and dunks it in a wintry soda.

Blown minds took to Twitter to express their feelings on the circumstance:

I'm sorry, did they just show a fan at the @usopen dipping chicken fingers in their soda? I'm shook.

Pretty sure I just saw a woman dunk her chicken finger in Coke at the #USOpen and take a bite. Now I want to try it. 🤔

ESPN just showed a woman at the US Open dipping a chicken finger into her soda, and I can't wait for that to become a thing. #USOpen

Frank Bi of SB Nation, who was on the scene celebrating Labor Day at the U.S. Open, offered this theory/on-the-ground viewpoint: “cause all the ketchup dispensers are out, I checked. It’s a disaster here rn.”

Just seen a lady at US Open dipping her chicken finger into her soda. Wtf??

Now, there could be many different reasons for this tactic — perhaps this woman requires hard foods to be softened first for digestive purposes? Hmm, we could definitely see that.

Or, possibly the woman just likes dipping her chicken fingers in soda.

Nonetheless, soda is used for cooking purposes as well, especially when making a scrumptious Coca-Cola Cake (with Coca-Cola frosting or without).

Likewise, research has confirmed that ranch dressing pop is an actual thing.

Even, while the combo of solid protein (the chicken), crispy savory (the batter), and sugary soda might have its intriguing facets, we sure as shooting don’t see this becoming a part of “pop” culture.

Check out the video for yourself below.

So this happened at the US Open today… 🧐 pic.twitter.com/fRDmpd3YWE

Some peculiar food combinations that sound gross but are actually quite tasty are: Peanut butter on a hamburger, Cheetos and milk, Frosted Flakes with cheese, and PB&J with Doritos in the middle.