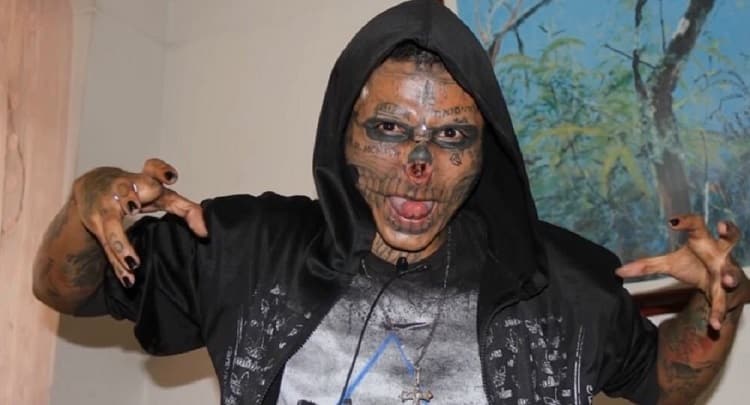 Us millennials have always wanted to be more unique than the everyone else. A lot would even go through such toxic lengths to ensure that they are as special as they can be. Of course, this is only one of the few ways of making your existence more tolerable in the cold dark road to death called life. Anyway, one Colombian guy took that to the extreme, he wanted to look like a skull, so he skull-pted himself to look like one.

You may be asking, why did he not just wait for his death, he was going to look like a skull anyway. Well, in a true millennial fashion, he got impatient. So the guy, named Eric Yeiner Hincapié Ramírez, also a tattoo artist, is now called Kalaca Skull after he cut off half his nose and his ears, and tattooed his eyes black. We’re still not sure yet whether he is a superhero or a supervillain, but hey, now he is unique.

22-year-old Ramírez’ obsession with skulls began back when he was just a child. He was actually planning to look like a skull long ago but his mother would not allow it. It was only until after his mother died that he was able to do what he wanted with his body, beat that, other millennials.

But wait– there’s more, after gaining much attention from the media and people in the internet, Kalaca Skull wants to complete his transformation even more! So he is also adding more skeletal tattoos on his face and body to complete the look. He also split his tongue in half and dyed it dark.

Kalaca Skull admitted that he did it because it was what we all look like underneath anyway. He also urged people not to judge him because of his body modifications. He seems happy though and thinks what he did is a “dream come true,” despite looking like a nightmare.

Nicolas Cage to Give Stolen Dinosaur Skull Back to Mongolia

Together with the fireworks for the Independence Day weekend, the latest explosive Hollywood news involves no one else but the controversial Kanye West. The famous celebrity has revealed his plans for a presidential run. Originally planned for 2024, he has stated that he is actually going to run for the 2020 Presidential elections in November. The… END_OF_DOCUMENT_TOKEN_TO_BE_REPLACED

Recent trends have reported that K-pop fans in the US are getting mixed in with current issues in politics. K-pop fan communities are using online platforms to rally up and protest against racism in the United States. In support of the #BlackLivesMatter movement, the online K-pop community has come together in protest. Never has it… END_OF_DOCUMENT_TOKEN_TO_BE_REPLACED