John McCain Bitch Slaps Trump From Beyond the Grave

No matter how you feel about John McCain politically or personally, it cannot be said that he did not earn his nickname of “Maverick” while serving in Congress. Throughout his tenure as a senator, McCain gleefully opposed his party just as often as he went with them. He was a regular in voting against legislation that every other Republican voted for. It made him a well-known name in Congress and across the country, supporting multiple high-profile but ultimately unsuccessful campaigns for President.

This didn’t automatically make him a great legislator, but he was one of the few brave souls in Congress willing to buck the party line. Sure, he might have introduced Sarah Palin to the national spotlight. And perhaps her introduction was indeed the beginning of the idiotification of the Republican party. Maybe her presence indicated that being a total dolt was acceptable in the eyes of the conservative American voter. And just maybe that started the ball rolling on what would become Donald Trump’s truly moronic but paradoxically campaign for President, elevating know-nothingism to a credibility never before achieved by such a nightmarishly stupid doctrine. 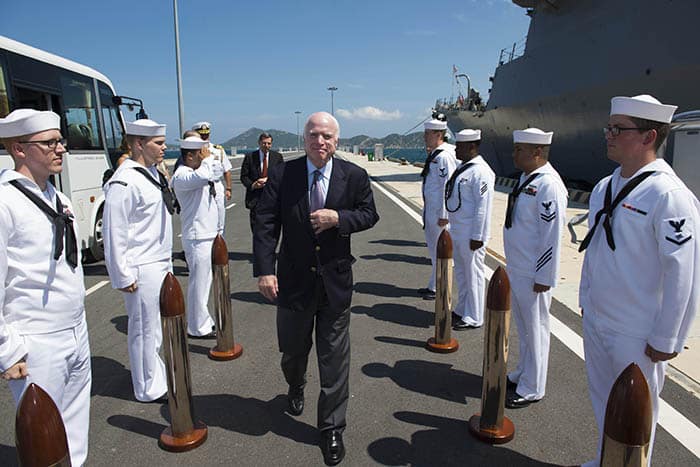 But despite all that, McCain was a stalwart anti-Trump Republican. He detested the man and everything he represented, just like most people with a functioning brain. And McCain had brain cancer, but still managed to summon the faculties to realize Trump is an enormous dumbass!

While alive, McCain took advantage of the plentiful opportunities to speak out against Trump, writing in a 2017 op-ed that Trump was a “president who has no experience of public office, is often poorly informed and can be impulsive in his speech and conduct. We must respect his authority and constitutional responsibilities. We must, where we can, cooperate with him. But we are not his subordinates. We don’t answer to him. We answer to the American people.”

Remember, this is the dude who literally crawled out of his sick bed and flew to Washington D.C. just to cast a vote against Donald Trump’s signature attempt to repeal the Affordable Care Act, something the Republican House has done so many times that they mumble yea votes in their sleep.

McCain jetted down to DC and, after walking into the Senate to a cascade of rousing applause from his colleagues, cast a pivotal vote to keep the ACA from being repealed, but that was not sufficient. He then took to the floor of the Senate and proceeded to lambast the Senate’s inept attempt to remove successful legislation because a black dude was involved in passing it. McCain stood there, with a surgical scar above his eyebrow clearly visible, and lectured the Republican-controlled Senate about how terribly they were governing the country. He then proceeded to pull down his pants, turn his ass to the Speaker, and slap his butt cheeks to furious applause and the tune of “Bad to the Bone.”

I seem to remember that happening, anyway. It was the kind of thing that makes a bald eagle cry.

If there was ever anyone who simply DGAF about Trump and his reactions to whatever, it would be McCain. Hilariously, it looks like John McCain got last licks on Trump at his funeral, using the ceremony as an opportunity to bitch slap Trump from beyond this mortal plane.

First, Trump was prominently and publicly uninvited from McCain’s funeral by McCain himself. The dude clearly knew he was knock-knock-knocking on Heaven’s door, and he wanted to make sure Trump didn’t show up and sully the dignity of the proceedings with the vague scent of spray tan and tacky cologne that follows him around like Linus’ dirt cloud.

Sen. McCain should not be talking about the success or failure of a mission to the media. Only emboldens the enemy! He’s been losing so….

That was not quite bad enough, though. The speakers at McCain’s funeral were dignified, striking exactly the right tone for the event and praising the Senator’s life and accomplishments, even if they were not Republicans. They talked about McCain’s willingness to work outside his party, and how important it was to not divide our country into “us” and “them,” to remember we all love this country and seek a better America.

Trump, somehow, was deeply insulted by this. The eulogizing was, of course, obliquely mentioning the brand of asshole politics that Trump has popularized, but he was never mentioned directly. As a result, it looks like Trump is mad because people talked about civility and dignity, two topics with which Trump has not even a passing acquaintance. Well, and because he wasn’t invited to the cool kid’s party but Obummer was. He also eagerly railed on about his favorite made-up topic, the “rigged” Russia investigation that he keeps obstructing and related garbage.

“You have a Fake Dossier, gathered by Steele, paid by the Clinton team to get information on Trump. The Dossier is Fake, nothing in it has been verified. It then filters into our American court system in order to spy on Barrack Obama and Hillary Clinton’s political opponent……

Trump was also busy playing golf, a practice that he railed against Obama for. Better still, Trump appears to be a terrible golfer, playing with a high handicap while aides are forced to praise his mediocre performance.

It’s transparently the logic and actions of a sixth-grade bully, on display from the President of the United States. You could say it’s not much worse than what Trump normally does, but it’s certainly not any better either.

John McCain Reports For Jury Duty, Live-Tweets It Just Like You Do

You’re All Infringing on Alex Jones’ Freedom to Be a Total Bastard—UNAMERICAN!