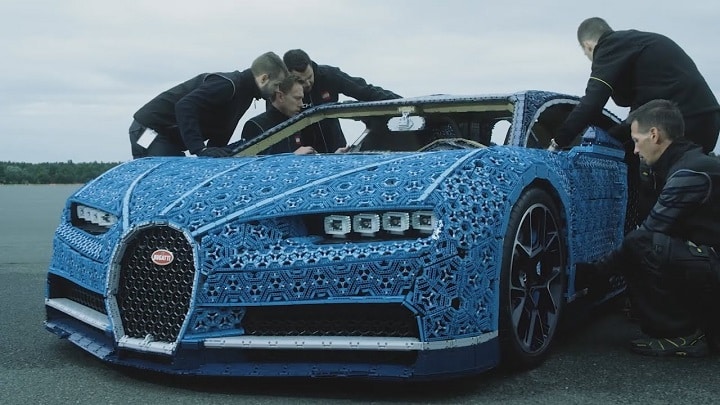 Most of us would probably be never able to afford a top sports car in our lifetimes, several even. Those things can only be bought by drug lords, politicians, or people in the entertainment industry. However, you can now rejoice in the fact that you can probably build your own sports car, more specifically, a Bugatti Chiron.


At least, that is what LEGO did with their plastic LEGO parts. They built a working Bugatti Chiron out of toys. As proof that it was actually working, they had it driven by a professional race car driver who tested the first ever Bugatti Chiron. How well does it perform you ask? Not good, sorry for getting your hopes up. But hey, take a quick look at how LEGO did it here:

They actually used LEGO Technic, which people can use to build a replica of anything. A working car, however, is a lot more difficult to pull off. As you saw on the video, plastic does not handle vibration well, meaning the LEGO Bugatti can only drive at a certain low speed, otherwise the engine vibration would shake off all the LEGO parts.

Oh, and then there’s the fact that the prolonged heat would also probably melt the LEGO. Plastic, after all, is not a conductor. Anyway, your hope for a Bugatti using LEGO parts is still far-fetched, it’s not viable for everyday use, no matter how dramatic LEGO can get with its features. Nevertheless, that was one hell of an advertisement both for Bugatti and LEGO. By the way, the pedals are made out of LEGO too, and it is definitely not safe to step on LEGO, so 0/10 for this car safety, utterly dangerous car.

Guy Drives Land Rover In River For Cleaning; His Carwash Savings Are Staggering

The US arms sale industry is large and successful. More than 30% of exported weapons in the world come from the United States. They supply to no less than 90 nations making it one of the largest suppliers of weapons in the world. The US makes an estimate of almost 200 Billion dollars in annual… END_OF_DOCUMENT_TOKEN_TO_BE_REPLACED

Now that the election results are almost final, we all want to ask what’s going to happen to Donald Trump after leaving the office? All US Presidents inevitably reach the point where they leave the White House.  Besides, the constitution states that all US Presidents are subject to a two-term limit. What do former presidents… END_OF_DOCUMENT_TOKEN_TO_BE_REPLACED

This is the first time in modern history that the US held presidential elections in the middle of a pandemic. In truth, the US elections may have overshadowed COVID-19 and the side effects are limitless. America is facing a tough crisis of discontentment with the current administration. An understandable case but a situation that may… END_OF_DOCUMENT_TOKEN_TO_BE_REPLACED