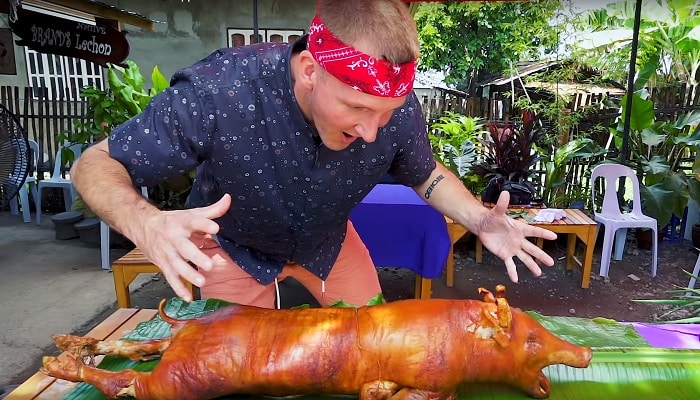 Vegans and vegetarians are noble people for volunteering not to eat meat. Most of the time, meat in the modern era is raised, processed, and slaughtered inhumanely, leading to a lot of moral dilemmas. However, there can also be times when vegans/vegetarians tend to overstep boundaries and try to force their views on people, even going as far as censoring anything meat-related and depriving people of their choice of food.


One food vlogger might have been a victim of such cultural extremity. Sonny Side, also known as the creator and poster boy of Best Ever Food Review Show recently fumed at what he considered as “anti-meat people” who were apparently responsible for Facebook censoring his video featuring a roasted pig. It seems a lot of “vegans and vegetarians” might have had reported his video en masse.

More specifically, Sonny featured a roast pig unique to the Philippines, called lechon which is cooked spit-roasted rotisserie-style. The lechon Sonny featured was stuffed with crabs, mussels, and shrimps before being roasted, and another was stuffed with a whole chicken. It is worth noting that the pig was already dead and slaughtered as humanely as possible before being cooked, as per tradition in the Philippines.

Sonny also just wanted to show the world some of the most unique food in other countries and not to cast judgment on other cultures. Meanwhile, his videos were also affected adversely because of the Facebook censorship. For that, Sonny not only resented “anti-meat” but also “anti-culture” people who apparently did not have an open mind to other people’s traditions and values.

He urged people who are bothered by the food of other cultures to just turn away and stop watching his channel as well as to respect other customs and cultures since they do not exist to contradict others’ worldviews. If you are ever in the Philippines too, you might want to try the lechon, best pork dish ever in there. Or don’t, up to you.

The Blood Test, The Swab Test, and The Saliva Test      Essentially, there are three general types of COVID-19 testing produced so far. One is the rapid test, the second is the saliva test and the other is the swab test. The rapid test (also known as the anti-body test) uses blood samples. The swab test… END_OF_DOCUMENT_TOKEN_TO_BE_REPLACED

The COVID-19 pandemic is one of the biggest modern pandemics known in history. Currently, there are more than five million confirmed cases in the world, with a total of 333,000 deaths. A total of 1.6 million of these confirmed cases are in the US alone. The world is currently in a race of finding a… END_OF_DOCUMENT_TOKEN_TO_BE_REPLACED

Despite concrete data and research, people’s opinions will always be diverse when it comes to a variety of topics including religion, politics, gender, and more. Denial is a common reaction to many important discussions and serious world events. The COVID-19 pandemic does not differ from any issues and is subject to opinions from critiques all… END_OF_DOCUMENT_TOKEN_TO_BE_REPLACED

Back in January, when the Wuhan, China coronavirus broke out, it didn’t make it to the front page of newspapers, in print or virtual form. Today, January feels like a lifetime away. Like it or not, people around the world have adapted to the new normal – staying at home, frequent hand washing, and social… END_OF_DOCUMENT_TOKEN_TO_BE_REPLACED

Since the beginning of the year 2020, the whole world has been stupefied by the rapid spread of a deadly coronavirus known as COVID-19. World superpowers in the West were unable to prevent the virus from reaching their borders. Because of this fact, the novel coronavirus COVID-19 became a world-wide pandemic no less than three… END_OF_DOCUMENT_TOKEN_TO_BE_REPLACED

For months since the start of 2020, the attention of the world has focused on immediate response efforts to contain and combat the novel coronavirus, also known as COVID-19. The deadly virus has pushed millions of people into isolation.  This kept people in their homes for weeks and months away from their work, their friends,… END_OF_DOCUMENT_TOKEN_TO_BE_REPLACED