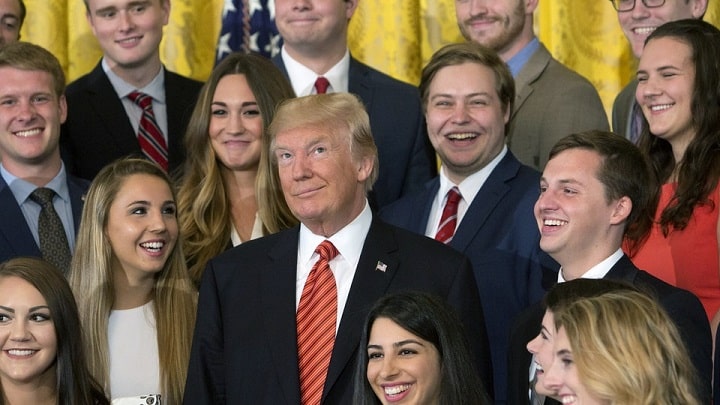 It’s certainly no secret that the seat of power in the U.S., the White House, is mighty white, and we’re not just talking about paint. Despite being blown up dozens of times over by external threats in Hollywood movies, the real threat in the White House might be inside. You see, recently leaked photos from a White House intern unintentionally hinted at a certain lack of consideration for people of color. Here it is below:

Of course, the said internship program is promoted by none other than the current president. Hence critics have noticed a certain difference in the choice of interns between the previous and the current administration. The said leaked photos was that of a group picture of all the White House interns and it is dominated by Caucasian youth, just like last year’s internship.

Statistically, about a third or nearly half of all the millennials in America are minorities and given that the internship program is supposed to be a somewhat fair representation of the demographics of the country, the most recent Summer internship program was suspiciously white. The situation was then likened to Trump’s current cabinet, whose non-white members are quite scarce, compared to the Obama administration’s, of course.

This might not be too surprising anymore though since Trump has been vocally “racist” in the past and in the present. His policies, particularly for immigrants have also reflected his regard for people of color, or the lack thereof. Still, the White House was quite reluctant to release the said leaked photo, which only got into the internet thanks to one of the interns posting it on Instagram. It has since been taken down, though.

Recent trends have reported that K-pop fans in the US are getting mixed in with current issues in politics. K-pop fan communities are using online platforms to rally up and protest against racism in the United States. In support of the #BlackLivesMatter movement, the online K-pop community has come together in protest. Never has it… END_OF_DOCUMENT_TOKEN_TO_BE_REPLACED

Just this week, lawmakers approved a bill establishing the District of Columbia (D.C.) as the 51st state of the United States of America. This is after multiple calls and protests from the citizens to finally consider D.C. as a state.  However, the bill is not out of the woods yet as it faces multiple oppositions… END_OF_DOCUMENT_TOKEN_TO_BE_REPLACED