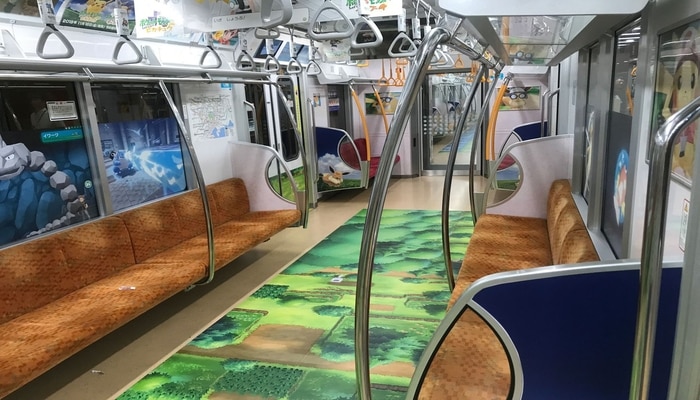 To celebrate the upcoming release of Pokémon Let’s Go Pikachu And Let’s Go Eevee for the Nintendo Switch, Pokémon themed trains are springing up in select areas of Japan.

More specifically, the Marunouchi lines and Tokyo Metro Ginza are the only services boasting the Pokémon makeover.

The train carts have been entirely revamped to promote the Let’s Go launch later this year, however only on the inside. From the platform, the exterior of the train looks like an ordinary cart.

However when the doors are opened commuters are greeted to an illuminated re-imagining of the in-game world of Let’s Go, and it will remain this way until August 30th.

Personalized outfits for Eevee and Pikachu decorate the walls; Misty, Professor Oak, and Brock are seen throughout the carts; the floor’s a mapped-out route from Kanto; and trailers are exhibited on screens above the seats.

Pokémon: Let’s Go Pikachu And Lets Go Eevee will release on November 16th for the Nintendo Switch, and they are aimed to reintroduce you to the the original 151 Pokémon.

Their Alolan and Mega Evolved forms from Pokémon X and Y, Alpha Sapphire and Omega Ruby, and Sun and Moon will too be in the game.

The Nintendo Switch will support co-operative multiplayer, and you can even sway your Joy-Con controller to capture a wild Pokémon.

The Blood Test, The Swab Test, and The Saliva Test      Essentially, there are three general types of COVID-19 testing produced so far. One is the rapid test, the second is the saliva test and the other is the swab test. The rapid test (also known as the anti-body test) uses blood samples. The swab test… END_OF_DOCUMENT_TOKEN_TO_BE_REPLACED

The COVID-19 pandemic is one of the biggest modern pandemics known in history. Currently, there are more than five million confirmed cases in the world, with a total of 333,000 deaths. A total of 1.6 million of these confirmed cases are in the US alone. The world is currently in a race of finding a… END_OF_DOCUMENT_TOKEN_TO_BE_REPLACED

Despite concrete data and research, people’s opinions will always be diverse when it comes to a variety of topics including religion, politics, gender, and more. Denial is a common reaction to many important discussions and serious world events. The COVID-19 pandemic does not differ from any issues and is subject to opinions from critiques all… END_OF_DOCUMENT_TOKEN_TO_BE_REPLACED

Back in January, when the Wuhan, China coronavirus broke out, it didn’t make it to the front page of newspapers, in print or virtual form. Today, January feels like a lifetime away. Like it or not, people around the world have adapted to the new normal – staying at home, frequent hand washing, and social… END_OF_DOCUMENT_TOKEN_TO_BE_REPLACED

Since the beginning of the year 2020, the whole world has been stupefied by the rapid spread of a deadly coronavirus known as COVID-19. World superpowers in the West were unable to prevent the virus from reaching their borders. Because of this fact, the novel coronavirus COVID-19 became a world-wide pandemic no less than three… END_OF_DOCUMENT_TOKEN_TO_BE_REPLACED

For months since the start of 2020, the attention of the world has focused on immediate response efforts to contain and combat the novel coronavirus, also known as COVID-19. The deadly virus has pushed millions of people into isolation.  This kept people in their homes for weeks and months away from their work, their friends,… END_OF_DOCUMENT_TOKEN_TO_BE_REPLACED