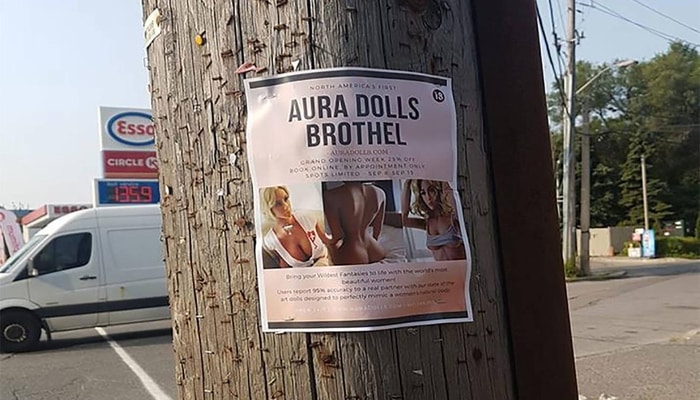 According to the internet, the establishment behind the brothel, the ideal is to bring a new way to achieve sexual wishes “without the many restrictions and limitations that a real partner may come with.”

The brothel is anticipated to open in a shopping plaza south of Sheppard Ave. on Yonge St., on Sept. 8.

The company does not provide the exact location on its site, emphasizing it’s announced upon booking.

“Exotic girls to cater to everyone’s choice of beauty,” reads the website.

“We tried really hard to try to cater to every single standard of beauty, we have different ethnicity, different eye colors, different hair color,” said Claire Lee, a rep for Aura Dolls. The company indicated they plan on extending their collection “in the near future,” and will implement male dolls.

The sex dolls are made of silicone, which is constructed to give them a realistic feel and look, Lee said. In order to sanitize the dolls, she explained a 3-step routine is utilized after each booking.

Though, staff still “highly recommend” the usage of condoms, accordant to the website.

Doors at the new bordello for separate entry and exit will be used to assure “maximum privacy for customers.” While the brothel does plan on having personnel on-site, they “should not have any interaction,” Lee said.

“The reason why we do that is to make sure that everyone feels comfortable coming in and exiting,” she explained, noting that persons may feel awkward or shy about visiting the site.

Airport Evacuated After Agents Mistake Sex Toy For A Grenade