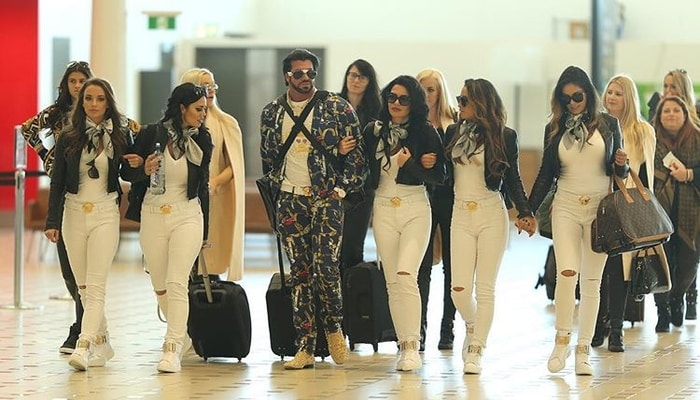 Tobacco tycoon, Travers Beynon has ‘strict rules’ for his girlfriends — one being that everyone in the house shares the same bedroom.

“We had a party at the mansion and then we would move up to the bedroom, which has a stripper pole, mirrored ceilings, and all the lights and smoke machines, LEDs and all that.

“We had a party at the mansion and then we would move up to the bedroom, which has a stripper pole, mirrored ceilings, and all the lights and smoke machines, LEDs and all that,” Travers said about a reoccurring experience in the household.

“She [his wife, Taesha] remembers one point where it just turned sexual and about 10 to 12 girls all jumped on me. And my wife told me that she couldn’t actually see me under the pile of girls, she said it was almost like I was being eaten alive.

“And I can tell you, there was a moment when that happened when I was able to see the ceiling, and I could see myself and I said to myself, ‘Ok, I think I can go now.’ I thought, ‘If my time’s up now I can happily go.’

“And it happened quite a few times after that so I feel pretty lucky. I’ve been waiting for the white light many times but it hasn’t come yet.”

Aside from the bedroom rule, Travers has several additional household stipulations he’s ordained.

“Every scenario you could think of has happened. It’s normal for me now but I’m so strict. I could have 10 or 20 girls here all the time but I have such strict rules so that it does work long term.

“I never struggle [to deal with tricky situations], I’m always clear and never unclear about the rules. My wife is my wife. And the rewards are there if you do the right thing.”

“I’m very picky – we’ve had girls from Peru, Colombia, Venezuela, Europe, Turkey, the UK, and what happens is they apply, I look at their looks and they have to write a description about why they would be a good girlfriend,” said Travers in regards to his girlfriend ‘weeding out’ process.

“Managing girls who are romantically involved, emotionally involved, can be challenging but the more you do it the better you get at it.”