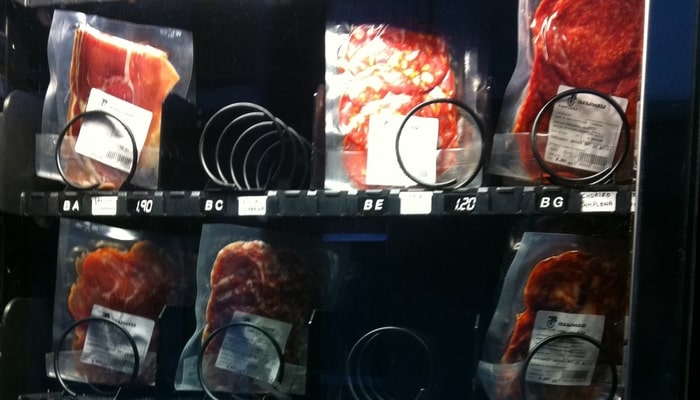 Say you are craving a juicy Ribeye in the middle of the night, and the local grocery store or butcher is closed — what do you do?

Well soon enough, you may be able to hit up a meat vending machine nearby, thanks to the outside-of-the-box minded gentleman behind the Applestone Meat Company.

Joshua Applestone, founder of New York-based establishment that bears his name, is on a quest to make choice cuts of raw pork, beef, lamb, and more accessible to the masses 24/7, and has already instituted his crafty meat vending machines in several locations around the Rotten Apple.

Now he’s seeking to broaden the operation quite intensively over the next few years by erecting dozens more and ultimately plans to bring them to every city in the United States, according to reports.

We have 60-day dry age steaks in the vending machines today, come and get yours before they are all gone! #dryage #Applestonemeatco #stripsteak pic.twitter.com/6DXTsfo2XX

The machines themselves work much like traditional vending machines stocked with candy and chips, only they are refrigerated and restocked more routinely.

Each dispenser is filled with a different type of protein (beef, lamb, pork, and ground sausage and meat), and they’re patterned after old-style carousel-type dispensers where a button revolves the selection inside.

To buy something, customers just swipe their credit card.

The machines presently functioning are so popular that they are selling 3,000 lbs of meat out of them per week.

And while the rising demand obligates them to be restocked several times per day, whatever meat doesn’t sell out is removed and restocked within 6 or 7 days.

When can you expect to see one of these machines in your neighborhood? Applestone states he hopes to be in Manhattan by 2019, and then spread out from there.

The Blood Test, The Swab Test, and The Saliva Test      Essentially, there are three general types of COVID-19 testing produced so far. One is the rapid test, the second is the saliva test and the other is the swab test. The rapid test (also known as the anti-body test) uses blood samples. The swab test… END_OF_DOCUMENT_TOKEN_TO_BE_REPLACED

The COVID-19 pandemic is one of the biggest modern pandemics known in history. Currently, there are more than five million confirmed cases in the world, with a total of 333,000 deaths. A total of 1.6 million of these confirmed cases are in the US alone. The world is currently in a race of finding a… END_OF_DOCUMENT_TOKEN_TO_BE_REPLACED

Despite concrete data and research, people’s opinions will always be diverse when it comes to a variety of topics including religion, politics, gender, and more. Denial is a common reaction to many important discussions and serious world events. The COVID-19 pandemic does not differ from any issues and is subject to opinions from critiques all… END_OF_DOCUMENT_TOKEN_TO_BE_REPLACED

Back in January, when the Wuhan, China coronavirus broke out, it didn’t make it to the front page of newspapers, in print or virtual form. Today, January feels like a lifetime away. Like it or not, people around the world have adapted to the new normal – staying at home, frequent hand washing, and social… END_OF_DOCUMENT_TOKEN_TO_BE_REPLACED

Since the beginning of the year 2020, the whole world has been stupefied by the rapid spread of a deadly coronavirus known as COVID-19. World superpowers in the West were unable to prevent the virus from reaching their borders. Because of this fact, the novel coronavirus COVID-19 became a world-wide pandemic no less than three… END_OF_DOCUMENT_TOKEN_TO_BE_REPLACED

For months since the start of 2020, the attention of the world has focused on immediate response efforts to contain and combat the novel coronavirus, also known as COVID-19. The deadly virus has pushed millions of people into isolation.  This kept people in their homes for weeks and months away from their work, their friends,… END_OF_DOCUMENT_TOKEN_TO_BE_REPLACED