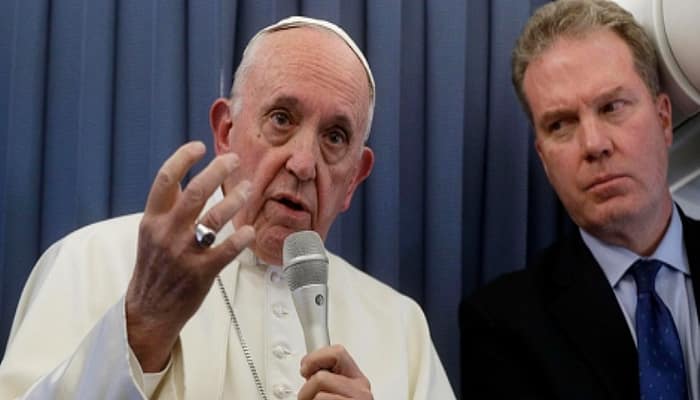 Pope Francis has suggested parents seek psychiatric assistance for children who display homosexual tendencies, during a press conference on his plane returning him to Rome from Ireland.

A journalist aboard asked the papal on Sunday what he would say to parents who acknowledge homosexual traits in their offspring.

“I would say first of all pray,” the Pope replied.

Parents must also consider the age of their child, he stated.

“There have always been gay people and people with homosexual tendencies.

“When it shows itself from childhood, there is a lot that can be done through psychiatry, to see how things are. It is something else if it shows itself after 20 years.”

The pontiff stressed that parents should not react with “silence”.

“Ignoring a son or daughter who has homosexual tendencies is an error of fatherhood or motherhood. This tendency shows a lack of parenting.

“This child has the right to a family. And the family not throwing him/her out.

“Don’t condemn. Dialogue. Understand, give the child space so he or she can express themselves.”

Francis said it may be necessary to seek psychiatric aid if a child starts to exhibit “worrisome” traits, however it’s another thing if an adult comes out as gay.

Man Hangs up on “Pope Prank Caller”, Finds Out It’s Actually Him

Just this week, lawmakers approved a bill establishing the District of Columbia (D.C.) as the 51st state of the United States of America. This is after multiple calls and protests from the citizens to finally consider D.C. as a state.  However, the bill is not out of the woods yet as it faces multiple oppositions… END_OF_DOCUMENT_TOKEN_TO_BE_REPLACED

John Bolton’s new book entitled ‘The Room Where it Happened’ had been stirring up quite the attention since it was announced for release last week. Officially released only June 23, the new book seems to threaten the Trump administration as there had been moves to get it unpublished. The request was later on turned down… END_OF_DOCUMENT_TOKEN_TO_BE_REPLACED

Learning about the Juneteenth Holiday The Juneteenth holiday, celebrated every 19th of June, is a commemoration of the liberation of enslaved African-Americans in the United States. It was on the 19th of June 1865 when Union Army General Gordon Granger announced General Order No. 3 in Galveston, Texas officially emancipating slaves in the entire state.… END_OF_DOCUMENT_TOKEN_TO_BE_REPLACED