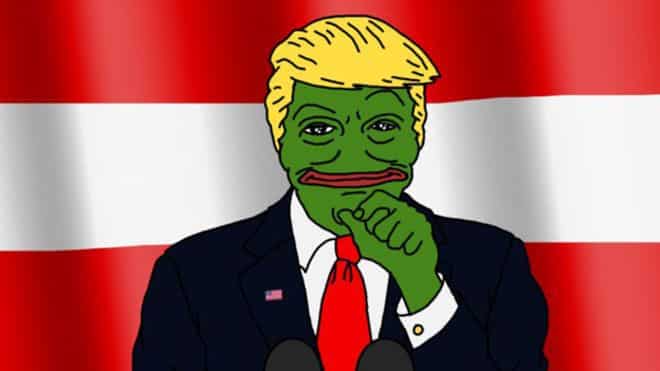 The left has come up with more than a few terms to describe conservatives and the alt-right, but few are more creative than the insults I’ve gathered below. Whether you’re looking for a comeback to some troll online calling you a snowflake, or you want to keep a few in your back pocket for when the time comes, these will definitely get you the reaction you’re looking for. Piss off a Republican or add a few new words to your vocabulary with these creative insults used to describe the alt-right.

According to UrbanDictionary.com, an alt-right warrior is someone who firmly supports Trump, his policies, and anyone who happens to be his advisor that week. Even though they consider themselves to be “anti-establishment,” they often ignore the fact that Trump and his political positions are in fact pro-establishment. By ignoring any facts that aren’t consistent with their political beliefs, alt-right warriors are blissfully unaware of the irony of supporting Trump.

“‘Alt-right warriors’ claim to be anti-establishment while ignoring the establishment personnel appointed to key cabinet and political positions by Trump, who include high-level Goldman Sachs executives and former executives. These ‘warriors’ either ignore or are dismissive of Trump’s aim to enforce federal laws against recreational use of marijuana toward states that have chosen by popular vote to legalize it.”

A Rethuglican, or Rethug for short, is the clever combination of the words Republican and thug. It describes a Republican who gets elected into office and then proceeds to change the laws so that all of their illegal activities become legal. Hardly a new phrase, calling the alt-right Rethuglicans has been a thing long before Trump stepped into the White House.

Unlike the wingnut commonly used when building Ikea furniture, a wing nut is a person who has irrational political views often stemming from their religious beliefs. These are all of the alt-right extremists who like to quote the Bible when it’s in their favor and think that everyone should live their lives just as they do.

“An eccentric driven by religious fervor to take on unusual or irrational social or political opinions without care that other members of society consider them off balance. The extremism of these people’s faith is proof to them that they are right.”

While some use this term to describe a pumpkin that strongly resembles Donald Trump, it’s more commonly used to describe the alt-right. Combining the words Trump and munchkin, a Trumpkin is a Trump supporter with the simplicity and gullibility of the munchkins in the Wizard of OZ.

“The term invokes the munchkins of Oz, a miniaturized people of questionable intellectual backing and strong propensity towards astronomical heights of gullibility.”

The term Trump Jungen describes the young people who follow and support Trump and his policies. It is derived from Hitler Jungen, which was the phrase used to described the children and young supporters of Adolf Hitler. Jungen translates to “young animals” and referred to the Nazi boys and girls of Germany. Seems suitable!

Trump Bumper Stickers That You Have To See To Believe

The Blood Test, The Swab Test, and The Saliva Test      Essentially, there are three general types of COVID-19 testing produced so far. One is the rapid test, the second is the saliva test and the other is the swab test. The rapid test (also known as the anti-body test) uses blood samples. The swab test… END_OF_DOCUMENT_TOKEN_TO_BE_REPLACED

The COVID-19 pandemic is one of the biggest modern pandemics known in history. Currently, there are more than five million confirmed cases in the world, with a total of 333,000 deaths. A total of 1.6 million of these confirmed cases are in the US alone. The world is currently in a race of finding a… END_OF_DOCUMENT_TOKEN_TO_BE_REPLACED

Despite concrete data and research, people’s opinions will always be diverse when it comes to a variety of topics including religion, politics, gender, and more. Denial is a common reaction to many important discussions and serious world events. The COVID-19 pandemic does not differ from any issues and is subject to opinions from critiques all… END_OF_DOCUMENT_TOKEN_TO_BE_REPLACED

Back in January, when the Wuhan, China coronavirus broke out, it didn’t make it to the front page of newspapers, in print or virtual form. Today, January feels like a lifetime away. Like it or not, people around the world have adapted to the new normal – staying at home, frequent hand washing, and social… END_OF_DOCUMENT_TOKEN_TO_BE_REPLACED

Since the beginning of the year 2020, the whole world has been stupefied by the rapid spread of a deadly coronavirus known as COVID-19. World superpowers in the West were unable to prevent the virus from reaching their borders. Because of this fact, the novel coronavirus COVID-19 became a world-wide pandemic no less than three… END_OF_DOCUMENT_TOKEN_TO_BE_REPLACED

For months since the start of 2020, the attention of the world has focused on immediate response efforts to contain and combat the novel coronavirus, also known as COVID-19. The deadly virus has pushed millions of people into isolation.  This kept people in their homes for weeks and months away from their work, their friends,… END_OF_DOCUMENT_TOKEN_TO_BE_REPLACED