Maths Has Just Ruined One of Our Favourite ‘Friends’ Scenes

It’s been a very enlightening week for Friends’ fans. First, Reddit solved the puzzle of what was hiding in Joey’s oven during the finale, and now, a scientist has done the maths on that famous “PIVOT!” scene.

One of the most memorable scenes in a show known for its quotability, in the episode ‘The One with the Cop,’ Ross buys a new sofa for his apartment. After turning down the furniture store’s delivery service, Ross is horrified when he, Rachel and Chandler can’t get the couch up the stairs in his building.

This episode speaks to fans on a primal level, because at some point when moving house, we’ve all had our own “pivot” moment.

Well, a mathematician may have just ruined that iconic episode for us. Data science consultant Caroline Zunckel analysed the scene, and came to the conclusion that it WAS possible for the gang to get the sofa up the stairs.

She said: “By applying Pythagoras’ theorem to the estimated measurements of Ross’s sofa in a vertical position and dimensions of the stairs, I was able to establish that it would have been possible to get the item upstairs.

If that went over your head, Caroline believes that instead of focusing on pivoting the couch, Ross should have tried tilting it instead.

There’s even a handy picture guide for those of us that got a headache just looking at that equation. 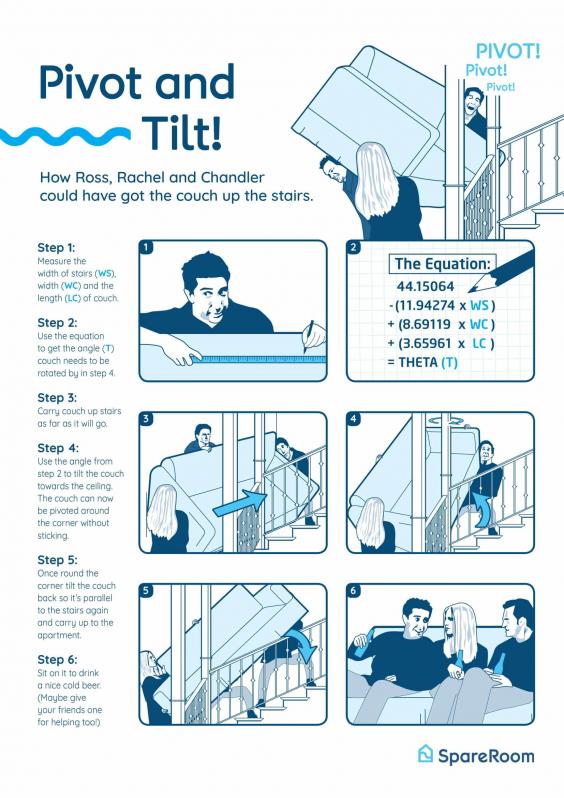 You see, this is why everyone hates maths.

Redditor Calculated How Much Money Joey Owed Chandler On ‘Friends’