You’re All Infringing on Alex Jones’ Freedom to Be a...

If you think for a second that Alex Jones’ is deterred in his search for truth, you are truly mistaken. As you can clearly see, if you were watching for the signs, you’d know that Alex Jones is clearly stronger than ever. He has marshaled his gremlin energy, taking his supplement pills, and is as red as a priapism ready to burst. He’s just as much of a raging dick-bag as ever, of course. But now he’s ready to take on the man.

Except, the man took him of YouTube. And Facebook. And Instagram. And Apple Podcast. And, eventually, sort of, Twitter. Yes, the last refuge of the racist asshole, Twitter, even sort of shunned Alex Jones, king of the melts. Alex Jones has been getting axed from rotation faster than you can sneer at a Democrat. And if you rant and rave about goblins but don’t post on YouTube, does your rant even make a sound?

The answer is that, of course, it does. Just a less annoying one. And that is why you and everyone you know is infringing on Alex Jones’ ability to harass Americans in the public square using whatever method he so chooses. Even if he decided to advocate for the death of Justice Department officials for having the temerity to investigate government corruption. Yes, you are forced to listen to him! That’s the American way, after all: unrestricted free speech for anyone no matter how much of a prick they are. 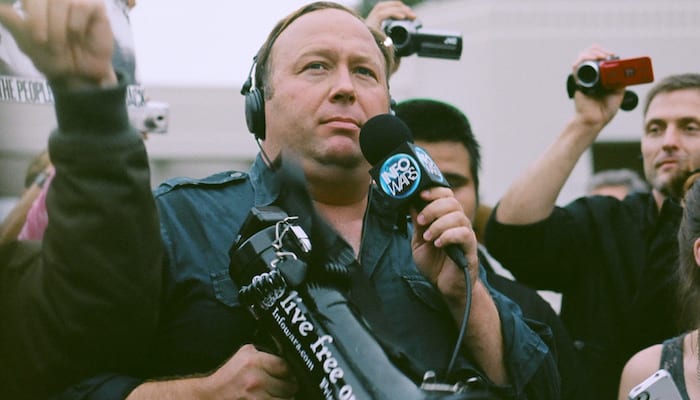 You would think, for someone who so frequently venerates the Constitution, Alex Jones would have a better idea of what the words actually mean. Laws against the government restricting your speech don’t apply to private entities. I can tell you to shut up whenever I want, just like YouTube can. Not that Mr. Jones is predisposed to see the nuanced difference between the two. The difference between Facebook and the U.S. government is, apparently, too fine a point for him the grasp.

Sidebar: “fighting words” is my favorite free speech exception. Mostly because I envision a cowboy spitting to the side and saying, “Them’s fightin’ words, boy,” when I imagine it. To quote Wikipedia’s definition of the topic:

In Chaplinsky v. New Hampshire (1942), the Supreme Court held that speech is unprotected if it constitutes “fighting words.” Fighting words, as defined by the Court, is speech that “tend[s] to incite an immediate breach of the peace” by provoking a fight, so long as it is a “personally abusive [word] which, when addressed to the ordinary citizen, is, as a matter of common knowledge, inherently likely to provoke a violent reaction.” Additionally, such speech must be “directed to the person of the hearer” and is “thus likely to be seen as a ‘direct personal insult’.”

Basically, this means that, if you walk up to someone and start talking shit, the government is within its rights to punish you or shut down your speech. While it does not protect clocking someone for ragging on your bird, find me a jury that will convict someone for decking a dude flinging insults at them.

Basically, Alex Jones’ idiot radio show can be categorized under more than one free speech exception. So even if YouTube et. al. was somehow subject to the same limitations as the government, they would likely be within their rights to shut down his show. I’m sure there would be a high-profile court case about it, but there would be reasonable legal justification for the action. Basically, Jones is out of luck because he’s a giant dick. Doesn’t matter if he has fans: his dumb show of incoherent babbling is still repulsive enough to be banned by society.