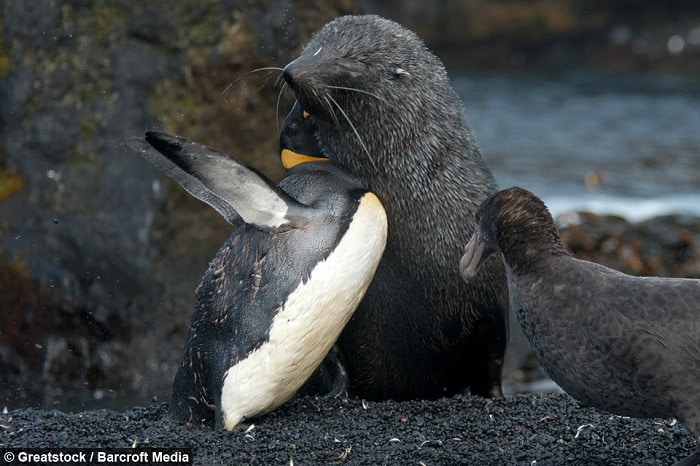 Nature is scary, one quick glance at some of the most bizarre creatures in Australia is enough to convince anyone. Oh, and there are also lots of rape stories among mammalian species, especially those that live near bodies of water. We have otters raping baby seals, dolphins apparently trying to rape humans, and penguins who are necrophiliacs. Seriously, nonhuman rape is quite prevalent too.


Now, we have seals raping penguins and it is apparently a newly developed behavior which was never observed before in the past. In a place called Marion Island in the southern side of the Indian Ocean, some penguins were unfortunate enough to be victimized by fur seals. Over the past few years, there have also been multiple recorded incidents and behaviors of seals sexually assaulting penguins. Here is one of the footages below, the video can be quite graphic though, be warned:

For those curious enough to ask, no– they cannot interbreed, and yes, that mating ritual is not consensual. There were even cases where the penguins get heavily injured by the seals during the rape. You can even see the penguins clearly resisting the assault in the video above. The behavior was also deemed to be quite rare.

As for why they are doing that to penguins, some experts were still torn. Previously it was assumed to be just a sexual release for the seals or a misassociation with hunting from the seals. However, other incidents revealed that some seals ate parts of the penguin after attempting to mate with them, basically crippling them but not killing them. Some penguins were also less fortunate, being eaten by the seal which just raped them.

Biologists have also hypothesized that it was a learned behavior, one that young seals might have picked up from older ones. Nevertheless, it appears to be an ongoing behavioral trend now for the seals of Marion Island.

Israel’s Iron Dome has protected the country against missile attacks for years. The Iron Dome in Israel is the biggest of its kind in the world. No other countries in the world use the same air defense system, meaning it is one of a kind. The tension between Israel and Gaza has been going on… END_OF_DOCUMENT_TOKEN_TO_BE_REPLACED

The world is devastated by the news that Britain’s Prince Philip, the Duke of Edinburgh, has died at the age of 99. Palace media confirms that the Duke has expired mid-day today, April 9th. The announcement did not contain any specifics on the cause of death. The United Kingdom will enter a state of national… END_OF_DOCUMENT_TOKEN_TO_BE_REPLACED

Who would have known that religious prophets would be among the most loyal supporters of former President Trump? In fact, it has been observed that the most conservative Christians may have been the right amount of push for Trump’s presidential win back in 2016. Since Trump’s election back in 2016, numerous self-proclaimed “prophets” have been… END_OF_DOCUMENT_TOKEN_TO_BE_REPLACED