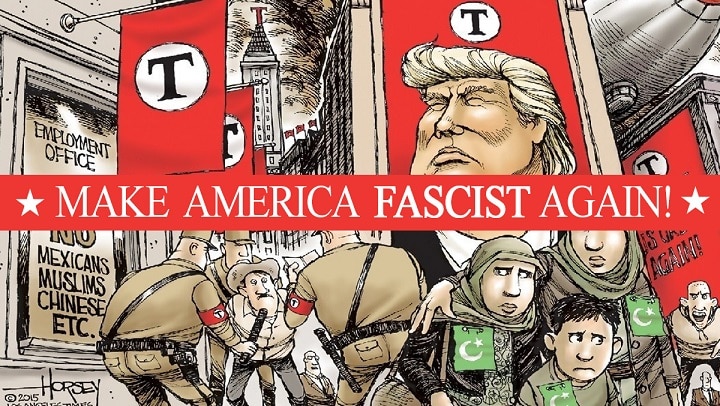 A lot of people are comparing U.S. President Donald Trump to certain racist historical figures like Hitler. After all, his actions and policies have shown certain worrisome similarities between the two figures. However, Trump may not be a Hitler just yet, but is just trying to be a Mussolini at the moment, according to a Nobel Prize-Winner.


For those who do not know who Mussolini is, Benito Mussolini founded Italian fascism. Which is a dictatorship not unlike what Adolf Hitler established in Germany. Hence, the two were actually allies back in World War II. Now as for Trump being likened to a dictator, 2008 Nobel Prize-Winner and economist Paul Krugman has warned that he may very well be the cause of the death of democracy in the U.S.

To make matters worse, Krugman predicted that democracy in the U.S. will soon die in a matter of months. Oh, and Trump also quoted Mussolini before, back in 2016 before he became president… that’s right, people voted for a fascist-quoting candidate.

In a New York Times column, Krugman wrote, “Make no mistake: if Republicans hold both houses of Congress this November, Trump will go full authoritarian, abusing institutions like the I.R.S., trying to jail opponents and journalists on, er, trumped-up charges, and more — and he’ll do it with full support from his party.”

Furthermore, Trump also echoed what Mussolini did back in the 1920s, where the Italian dictator declared that he alone was capable of restoring political order to Italy. Trump also said something similar back in the 2016 Republican National Convention, claiming that he alone can fix war, poverty, and violence in America. The similarities are quite uncanny and even alarming, one could wonder how Trump plans to “make America great again.”

Gift-giving isn’t just a seasonal affair between friends, families and acquaintances. The art of gift-giving is also conducted on a national scale with countries often sending each other big, weird and expensive gifts. Experts in all things gifts, Vanilla Reindeer put together some examples of these expensive and odd gifts that have been shared between… END_OF_DOCUMENT_TOKEN_TO_BE_REPLACED

There are lots of ways you can make Pres. Trump feel welcome: you can offer him coffee, or mow a penis into a field for him to view as his plane lands. The willie in question has been chopped by Born Eco ahead of the arrival of President Trump, who visited the UK Monday for… END_OF_DOCUMENT_TOKEN_TO_BE_REPLACED

The year isn’t even halfway over, yet Donald Trump has managed to make a fool of himself and our country countless times. From inviting the national college football champions, the Clemson Tigers, all the way to the White House for some McDonald’s to his to the dreaded results of Mueller’s investigation, it has been one… END_OF_DOCUMENT_TOKEN_TO_BE_REPLACED

Republicans have always said that when they gained control in Congress, they would work to overturn Roe v. Wade and here they are, cashing in on that promise one state at a time. So far, Alabama, Arkansas, Georgia, Kentucky, Missouri, and Ohio have all passed incredibly restrictive laws on abortions, making it illegal for women… END_OF_DOCUMENT_TOKEN_TO_BE_REPLACED

If you’re on Snapchat, then you’ve probably played around with (and were likely horrified by) their filter gender swap filters. While you’re probably using these filters to send hilarious pics to your friends, some guys using them to create Tinder profiles. What likely started out as a joke has quickly evolved, and these guys are… END_OF_DOCUMENT_TOKEN_TO_BE_REPLACED

“Milkshaking” is a hilarious trend in Britain where a milkshake is thrown at and ideally lands on a far-right politician or activist. The point of this nonviolence protest is to humiliate them without causing injury. Physical injury at least. There’s no doubt that milkshaking has led to a few bruised egos. Not only is this… END_OF_DOCUMENT_TOKEN_TO_BE_REPLACED