by Alex Fox 4 years ago4 months ago

The boring-as-dirt but highly important trial of Paul Manafort has wrapped up its stultifying proceedings, and we have moved on to deliberations. Here, the jury of 12 of Manafort’s peers will judge his guilt or innocence, remaining together until a unanimous verdict is finally reached. It’s a process as American as warrantless wiretaps, immortalized in the classic of film-making 12 Good Men. But as dull and as dry as this trial for financial misdemeanors was, the jury has remained suspiciously undecided. It’s been a few days now: what could possibly be the holdup?

Your guess is literally as good as mine. They could be holding a paper plane contest with witness statements, for all we know. Sure, they might be legitimately concerned about returning a correct verdict. The moral types might struggle to sleep at night, knowing they hold the fate of a man in their sweaty grip. If they make the wrong choice, it will haunt their conscience for all eternity. It’s a weighty responsibility indeed. But serious civic duty is about as fun as tax code violations. 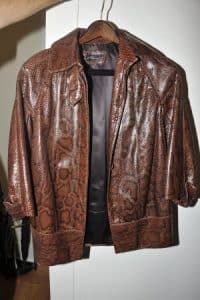 If we were on the Manafort jury, we know for sure that place would be lit up with the hottest of goss. These folks are in a unique position, posted at the epicenter of the fledgling investigation into Russia’s now-certain participation in the last Presidential election. With all this power, they must have some serious pull on the gossip train. Think of the behind-the-scenes tidbits they might be sharing, sequestered in a hot, steamy jury room that smells like Subway and air freshener. It would be scintillating.

In special consideration must be Manafort’s extravagant lifestyle. The jurors received a number of photographs testifying to Manafort’s living high on the hog, bankrolled by his secret accounts. This includes one particularly savory delight: a $15,000 ostrich leather jacket that, frankly, looks pitiful. He has an even more expensive python skin coat. It is a jacket so hideous that it could only be worn as a statement about the wealth of its owner. It is impossible to imagine that someone would don that jacket and believe they looked fly. But who knows, Paul Manafort might just be that dude. That dumb, dumb dude.

The 12 jurors must know of their position in the eyes of the world. They could hardly avoid the knowledge. Outside the courtroom are camped a band of rough and ready journalists, cameras trained on the courthouse to capture the very first moments of the verdict as it is delivered. That could be any time, so they wait, eyes unblinking and courage stout, for the fateful moment. Pfft, who are we kidding, they’re barely awake on intern-provided cocaine and coffee.

With that many eyes on you, it would be hard not to draw out the affair simply for the sake of a fun story. “Oh yeah, we totally agreed by day two, but they ordered the pizza from a really dope place so we just chilled for a while.” Because given the immensity of the evidence presented by the prosecution—27 witnesses  388 documents, including Mr. Manafort’s financial records and emails—it’s hard to imagine there’s a lot of daylight between Paul Manafort and a guilty verdict. And yet, the deliberators deliberate.

This is especially so when you consider the testimony of Rick Gates, Manafort’s long time right-hand man and partner in crime. He flipped, testifying on behalf of the prosecution against Gates. He gave testimony that he lied and cheated on behalf of Manafort to swindle the government, hiding foreign bank accounts from accountants and doctoring tax documents. Gates isn’t a perfect witness, of course—he himself plead guilty to felony charges. He’s testifying under pain of a heavier sentence should he decline. Of course, this is far from the first time a partner in crime has flipped on their associate, testifying to imprison their compatriot while getting themselves a sweet deal. Nevertheless, the jury is left to ponder who is more believable: Gates or Manafort?

And if Manafort is convicted, what will become of his hideous outwear?