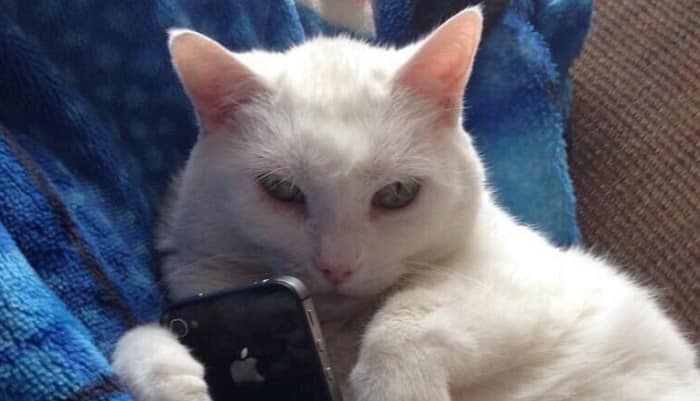 If you’ve ever wondered whether Donald Trump is a cat or a dog person, here’s your answer. The President has blocked a cat on Twitter (yes, you read that right) despite a ruling from the supreme court stating that he’s violating the First Amendment by doing so.

@BitchestheCat shared a screenshot showing that Trump has blocked her, along with the caption: “I really hope that the history books remember to note that this President was so weak and so insecure that he blocked a cat on Twitter.”

I really hope that the history books remember to note that this President was so weak and so insecure that he blocked a cat on Twitter. pic.twitter.com/qKryTwdPpF

When asked what the Wisconsin-based feline had done to deserve being blocked, Bitches responded by linking to every single tweet she’d ever sent to Trump. It turns out that the cat isn’t a fan of 45, with multiple posts criticising the President’s behavior and policies.

People want to know what you say to get blocked by Trump? Many things over many months. https://t.co/4L6DATHGKs

Still, Bitches is not alone. Trump has blocked many Twitter users in the past, including horror author Stephen King and model Chrissy Teigan.

To those who say cats can’t tweet. Bitches sent all her own tweets. pic.twitter.com/cwL0qAIsxI

Back in May, New York judge Naomi Reice Buchwald ruled that as president, Trump’s Twitter account is a public forum, and by blocking users he is violating their right to free speech. Which is ironic, considering his recent Twitter tirade over social media sites banning alt-right radio host Alex Jones from their platforms.

Trump Tweets About Work-Requirements For Food Stamps, From Comfort Of His Own Bed

The Blood Test, The Swab Test, and The Saliva Test      Essentially, there are three general types of COVID-19 testing produced so far. One is the rapid test, the second is the saliva test and the other is the swab test. The rapid test (also known as the anti-body test) uses blood samples. The swab test… END_OF_DOCUMENT_TOKEN_TO_BE_REPLACED

The COVID-19 pandemic is one of the biggest modern pandemics known in history. Currently, there are more than five million confirmed cases in the world, with a total of 333,000 deaths. A total of 1.6 million of these confirmed cases are in the US alone. The world is currently in a race of finding a… END_OF_DOCUMENT_TOKEN_TO_BE_REPLACED

Despite concrete data and research, people’s opinions will always be diverse when it comes to a variety of topics including religion, politics, gender, and more. Denial is a common reaction to many important discussions and serious world events. The COVID-19 pandemic does not differ from any issues and is subject to opinions from critiques all… END_OF_DOCUMENT_TOKEN_TO_BE_REPLACED

Back in January, when the Wuhan, China coronavirus broke out, it didn’t make it to the front page of newspapers, in print or virtual form. Today, January feels like a lifetime away. Like it or not, people around the world have adapted to the new normal – staying at home, frequent hand washing, and social… END_OF_DOCUMENT_TOKEN_TO_BE_REPLACED

Since the beginning of the year 2020, the whole world has been stupefied by the rapid spread of a deadly coronavirus known as COVID-19. World superpowers in the West were unable to prevent the virus from reaching their borders. Because of this fact, the novel coronavirus COVID-19 became a world-wide pandemic no less than three… END_OF_DOCUMENT_TOKEN_TO_BE_REPLACED

For months since the start of 2020, the attention of the world has focused on immediate response efforts to contain and combat the novel coronavirus, also known as COVID-19. The deadly virus has pushed millions of people into isolation.  This kept people in their homes for weeks and months away from their work, their friends,… END_OF_DOCUMENT_TOKEN_TO_BE_REPLACED