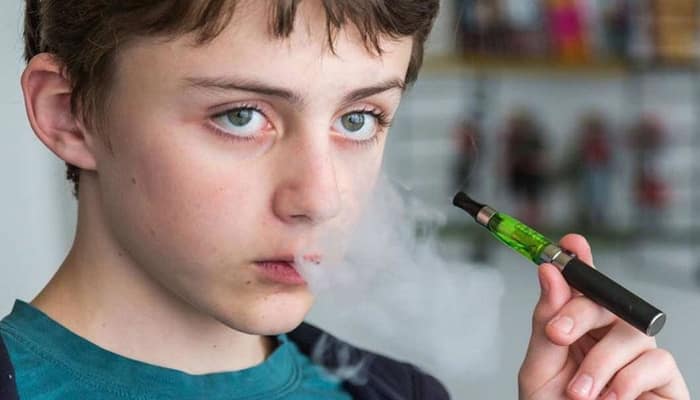 The popularization of electronic cigarettes continues to increase globally, as many individuals perceive them as a safer alternative to smoking.

However the long-term effects of e-cigarette consumption, widely called “vaping,” are unknown.

Today, researchers report that ‘vaping’ may alter the deoxyribonucleic acid, or DNA, in the oral cells of users, which could rise their cancer risk.

“E-cigarettes are a popular trend, but the long-term health effects are unknown,” states Romel Dator, Ph.D., who is presenting the research results at the 256th National Meeting & Exposition of the American Chemical Society (ACS).

“We want to characterize the chemicals that vapers are exposed to, as well as any DNA damage they may cause.”

E-cigarettes, introduced to the market in 2004, are electronic handheld devices that heat a liquid, normally containing nicotine, into an aerosol that the partaker inhales. Various flavors of liquids are available, including ones that appeal to youth, such as candy, fruit and chocolate.

They retrieved saliva samples before and after a 15-minute vaping session and examined the samples for chemicals that are known to damage DNA.

To assess potential long-term effects of vaping, the team analyzed DNA damage in the cells of the volunteers’ mouths. Balbo and Dator identified 3 DNA-damaging compounds, acrolein, formaldehyde and methylglyoxal, whose levels increased in the saliva following the vaping session.

Compared with people who do not vape, 4 of the 5 e-cigarette users displayed increased DNA damage in relation to acrolein exposure.

The type of damage, termed a DNA adduct, happens when toxic chemicals (such as acrolein) react with DNA. If the cell doesn’t repair the damage so that normal DNA reproduction can occur, cancer could result.

Gift-giving isn’t just a seasonal affair between friends, families and acquaintances. The art of gift-giving is also conducted on a national scale with countries often sending each other big, weird and expensive gifts. Experts in all things gifts, Vanilla Reindeer put together some examples of these expensive and odd gifts that have been shared between… END_OF_DOCUMENT_TOKEN_TO_BE_REPLACED

There are lots of ways you can make Pres. Trump feel welcome: you can offer him coffee, or mow a penis into a field for him to view as his plane lands. The willie in question has been chopped by Born Eco ahead of the arrival of President Trump, who visited the UK Monday for… END_OF_DOCUMENT_TOKEN_TO_BE_REPLACED

The year isn’t even halfway over, yet Donald Trump has managed to make a fool of himself and our country countless times. From inviting the national college football champions, the Clemson Tigers, all the way to the White House for some McDonald’s to his to the dreaded results of Mueller’s investigation, it has been one… END_OF_DOCUMENT_TOKEN_TO_BE_REPLACED

Republicans have always said that when they gained control in Congress, they would work to overturn Roe v. Wade and here they are, cashing in on that promise one state at a time. So far, Alabama, Arkansas, Georgia, Kentucky, Missouri, and Ohio have all passed incredibly restrictive laws on abortions, making it illegal for women… END_OF_DOCUMENT_TOKEN_TO_BE_REPLACED

If you’re on Snapchat, then you’ve probably played around with (and were likely horrified by) their filter gender swap filters. While you’re probably using these filters to send hilarious pics to your friends, some guys using them to create Tinder profiles. What likely started out as a joke has quickly evolved, and these guys are… END_OF_DOCUMENT_TOKEN_TO_BE_REPLACED

“Milkshaking” is a hilarious trend in Britain where a milkshake is thrown at and ideally lands on a far-right politician or activist. The point of this nonviolence protest is to humiliate them without causing injury. Physical injury at least. There’s no doubt that milkshaking has led to a few bruised egos. Not only is this… END_OF_DOCUMENT_TOKEN_TO_BE_REPLACED