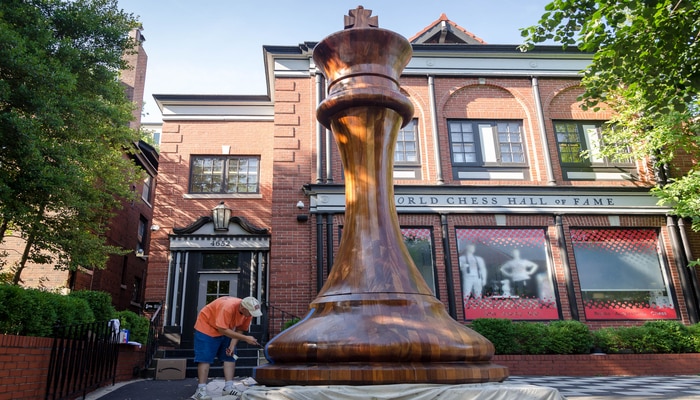 Members of the Missouri Chess Hall of Fame assembled the largest chess piece on the planet: a king standing at 20 feet tall.

Guinness World Records reported the massive wooden sculpture, crafted this year in Saint Louis to commemorate the 10th anniversary of the Saint Louis Chess Club, is the largest chess piece in the world, trouncing a 14-foot, 7-inch tall piece constructed in 2012.

The erect king, sculpted from African sapele mahogany, stands in the city in front of the World Chess Hall of Fame.

“The iconic king chess piece not only serves as a beacon for the Saint Louis Chess Campus, but also a regional and national landmark that exemplifies Saint Louis’ impact on the sport and art of American chess,” expressed Brian Flowers, marketing communications coordinator for the World Chess Hall of Fame.

Aside this, there are numerous peculiar Guinness World Records in existence. Some include:

The Most High Kicks by a Single Chorus Line

The Moulin Rouge dancers of Paris set the record for ‘most high kicks by a single chorus line’. They strove to break the old record, a meager 450 kicks. These ladies raised the bar, performing 720 kicks! That equaled out to 30 women performing 24 high kicks a piece.

The Most Nationalities in a Sauna

Maximare in Hamm, Germany set out to seize the title for ‘most nationalities in a sauna’. Cramming in pals from 91 different nations, they shattered the old record of 76.

fakir Zdenek Zahradka (Little Garden in English!) from the Czech Republic survived 10 days buried underground without water and food. Connected to the outside world only through a ventilation pipe, he beat out the recent record for being buried alive which was marked at 4 days.