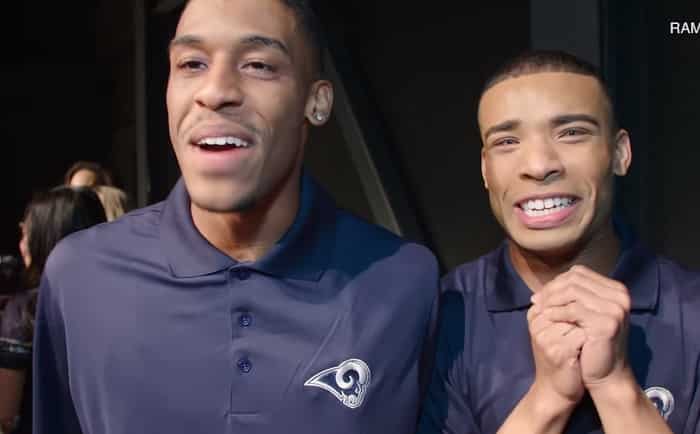 The National Football League (NFL) of America is yet again under another controversial spotlight. Who would have thought, right? The last few months have certainly been hard on the franchise, last year, it even lost millions of viewers. However, that did not seem to stop them from making another bold move.


This time around, male cheerleaders are coming to NFL, courtesy of the Los Angeles Rams and New Orleans Saints. The said two teams will be adding male cheerleaders to their squads for the first time. This means the upcoming season of NFL will feature them, and no, they are not just “stuntmen,” they will perform alongside female cheerleaders.

Specifically, a 40-person cheering squad including Quinton Peron and Napoleon Jinnies, two of the most well-known trained dancers to have ever been associated in NFL. It does seem that the sports franchise is promoting political correctness and gender equality for the franchise, hence the male cheerleaders.

Fans, however, are not too welcoming to the idea. A lot of them, including females fans, simply do not like it or do not see themselves as watching male cheerleaders. Such a move by the franchise even made some fans swear to quit watching American football entirely. Apparently, the majority of NFL’s fanbase are also males who are not tolerant of two allegedly gay male cheerleaders joining the all-female squad. It appears ignoring them can also be quite hard for NFL fans despite only being two males in a squad of female cheerleaders.

Previously, the NFL has also been under fire, specifically for their African-American players refusing to stand during the American national anthem. The primary reason for this was due to the police treatment of African-Americans under the Trump administration.

Trump is the First American President who gets impeached for the second time. Trump’s second impeachment became a trending topic on Twitter after the terrifying terrorist attack on Capitol Hill on the 6th of January. Twitter is at it again, being flooded with memes and Twitter jokes surrounding Trump’s second impeachment trial. Americans are trying to… END_OF_DOCUMENT_TOKEN_TO_BE_REPLACED

Twitter thoughts about the Capitol Riots posted by millions of Americans on the platform is a great read. Readers always get to see the two sides of a story. They get to learn what truly happened, what is the current development on the situation, and more. In this case, humor is always an easy defense. Many… END_OF_DOCUMENT_TOKEN_TO_BE_REPLACED