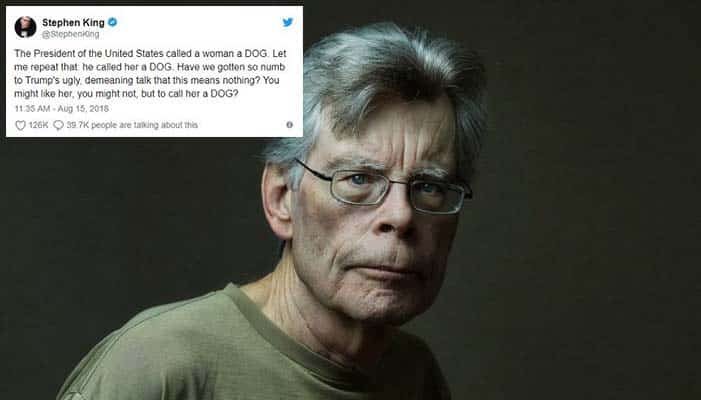 It’s well-known that Donald Trump is not popular with celebrities (well, except Kanye West), and the feeling seems to be mutual. In the last two years alone, Trump has feuded with Michael Moore, Chrissy Teigan, and Meryl Streep, with Seth Macfarlane writing an op-ed in 2016 explaining why Hollywood’s biggest stars refuse to align themselves with the President.

One of Trump’s biggest detractors is legendary horror author Stephen King, who came to the defense of former White House aide Omarosa Manigault Newman this week after Trump called her a “dog” on Twitter. The offensive tweet was in response to Manigault Newman’s new memoir ‘Unhinged: An Insider’s Account of the Trump White House,’ in which she accused the President of using racial slurs, amongst other things.

Unsurprisingly, people were disgusted that the President would call a women a “dog”

Ladies and gentleman that is the President of the United States, your commander and chief calling a woman a dog! What an excellent example he sets for the rest of the world.

And King was one of them

The President of the United States called a woman a DOG. Let me repeat that: he called her a DOG. Have we gotten so numb to Trump’s ugly, demeaning talk that this means nothing? You might like her, you might not, but to call her a DOG?

And as a Twitter user pointed out, this isn’t the first time, and it’s not just females

But why is “dog” Trump’s favourite insult? As The Cut pointed out, the majority of people consider dogs “beloved sweeties,” whereas Trump seems to think they’re constantly getting fired.

.@DavidGregory got thrown off of TV by NBC, fired like a dog! Now he is on @CNN being nasty to me. Not nice!

.@EWErickson got fired like a dog from RedState
and now he is the one leading opposition against me.

.@GlennBeck got fired like a dog by #Fox. The Blaze is failing and he wanted to have me on his show. I said no – because he is irrelevant.

So, while most of us might associate dogs with cuddles and walkies, Trump seems to relate them more to getting booted from your high-profile media job

Does anyone remember this @BillMaher clip when he got fired from ABC- in fact, fired like a dog! http://t.co/Xekz6GTm

I hear that sleepy eyes @chucktodd will be fired like a dog from ratings starved Meet The Press? I can’t imagine what is taking so long!

Trump and King’s feud has been ongoing for some time, with the 72-year-old blocking author on Twitter last year after he called out the “pettiness” of the President’s tweets.

The viciousness of Trump’s tweets is disturbing, the pettiness perhaps more so. This guy is not cut out for the main stage.

Trump has blocked me from reading his tweets. I may have to kill myself.

Although considering Trump has blocked 90% of Hollywood (there’s even a #BlockedByTrump hashtag), that’s not really surprising.

Will Smith disclosed in a podcast interview recently that he would “consider” running for president “at some point.” In an interview released Monday, the 52-year-old rapper told Crooked Media’s “Pod Save America”: “I think for now I’ll let that office get cleaned up a little bit. And then I’ll consider that at some point down… END_OF_DOCUMENT_TOKEN_TO_BE_REPLACED

Vaccination programs are currently on roll-out and countries that vaccinated for COVID-19 are talking. Questions are everywhere, and it is building up people’s anxieties about vaccination. How has the vaccine affected their population? Are the vaccines any good? Should we research more on newer vaccines? Can the vaccines kill the mutated virus? The answers change… END_OF_DOCUMENT_TOKEN_TO_BE_REPLACED

Texas Senator, Ted Cruz, received heavy criticism after taking a vacation to Cancun with his family in the middle of a crisis. The latest power crisis in Texas left hundreds of homes without electricity and water for more than 48 hours in negative degree weather. This has left the lives of many Texas residents in… END_OF_DOCUMENT_TOKEN_TO_BE_REPLACED