Punching Nazis Is So Patriotic Captain America Was Born for...

There’s been a somewhat unbelievable conversation happening in the public opinion sphere about how punching Nazis is actually bad. The idea underpinning this is, apparently, that just because people advocate for the violent genocide of class of people because they’re infringing on the ever-amorphous-and-expanding “White Rights,” doesn’t mean you’re allowed to sock them one in the kisser. So they can spout all the hateful propaganda you want, and all you’re allowed to do is go “nuh-uh” from your own dedicated corner. 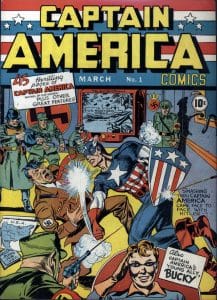 American has a long history of punching Nazis, both with its military and its fictional characters. Sure, you might say, we fought a whole war (a World War, even!) against those stinky German Nazis, but these ones are home grown! They have special privileges because they’re Americans! They definitely weren’t inspired by a Russian disinformation campaign and emboldened by the most clearly racist president since Andrew Jackson, why do you ask?

In fact, America loved punching Nazis so much that Captain America was literally born for it The comic started in 1941, and he was punching Nazis right from the get-go. And how could anything be more American than a strapping white dude with a stars and stripes shield? He’s the embodiment of America’s ideal self-image: an attractive, light-skinned, muscle-bound lad for which every decision is a black-and-white choice between glitteringly white and Vantablack evil. He’s the symbol of America beating up the distended corpse of Nazis ideas.

Yeah, it is. Touching anyone in a way they don’t want to be touched is a crime. And I imagine that falls under the rubric of punching. Would you find a cop to arrest you for it? Would you find a judge to sentence you? These are perhaps open questions. But there’s a valuable social good to be found in hitting back against horrific rhetoric, either verbally or physically.

The thing about tolerating viewpoints steeped in racial-motivated hatred and twisted misreasoning is that it’s a slippery slope into societal collapse. Society cannot continue to function if the social contract is shredded, if American values of tolerance and individuality are dumped on the curb, if good faith can no longer be assumed. Violent intolerance is the one thing we must not tolerate. Sure, maybe you don’t want to marry a gay man, whatever: that’s not intolerance. But getting disgusted by the presence of gay people is. Attempting to convert other people to your viewpoint by tweeting about how much you hate Da Gaeyz absolutely is. All right-thinking Americans should hit back against that kind of disgusting “opinion” wherever it lies. It cannot be permitted to become an acceptable part of the American discourse.

If you believe it can’t happen here, where have you been since 2016?

Think back to the Trail of Tears, Andrew Jackson’s then-lauded program of marching thousands of Native Americans across the Southern United States in a giant, moving pogrom that claimed the lives of thousands just to get pesky brown people off the white folk’s land. We look back on that today, and we shake our heads. How could a society be so deluded as to endorse and even promote such a policy? 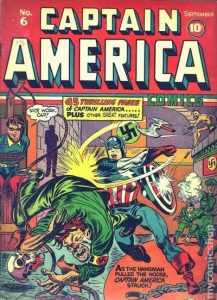 That’s a multi-pronged question to answer completely. But one of the answers is not “people back then were stupid and evil.” That exact same thing could happen today, with the names and places changed and the Evil Minority played by another group of people. It was allowed to happen back then because there wasn’t any kind of social movement against it. America, by and large, had normalized the notion of hating the “savages” that had the ill grace to populate the land before they showed up with guns and smallpox.

If we want to prevent literal atrocities from happening today, it is within our power. It is culture that draws the line between acceptable and unacceptable behavior. That culture is created by individuals as much as it is by mass media. When you see Nazis talking about how great Nazism is, it is your duty as an American to attack that notion as effectively as you can. Captain America showed you the way. All you need to do is follow his example.