7 Times Millennials Got Fed Up And Let Baby Boomers...

Baby boomers have had it out for millennials from the moment we received our college degrees and started gunning for their jobs. They say we have it easy, we’re entitled, and spend all of our time staring at our cell phones. We live with our parents well into our 30s and put avocados on everything. They love to crap on us for things they simply don’t understand, and millennials are starting to fight back. Here’s a look at some millennials who got fed up and let baby boomers have it!

1. Reminding Them Who Ruined The Housing Market

Millennials are stuck living with their parents because the cost of housing has more than tripled over the last few decades, while salaries certainly have not. Not to mention all of the student loans we have to pay off because it was ingrained in our heads from birth that going to college meant higher salaries. Too bad they were all wrong. 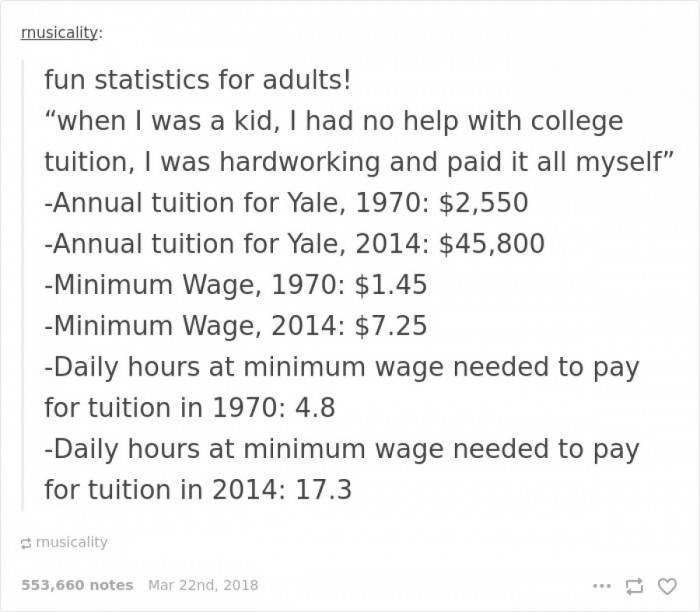 Baby boomers are proud of their accomplishments, as they should be. Being able to pay for college tuition on minimum wage is certainly something to brag about, but also quite impossible these days. Especially now that a college degree doesn’t necessarily mean you’ll get a job at a higher salary. So, keep your ancient stories to yourselves baby boomers. They’re not just irrelevant but incredibly annoying.

Baby boomers have been killing our dreams one condescending comment at a time. We were pushed to further our education. Told we could do anything. Be anything. Jokes on us!

4. How To Confuse A Millennial

We might still be living with our parents or stuck in a two bedroom apartment with five other people, but you don’t have to rub it in. It just encourages us to laugh at you while you’re being forced to retire early because you’re being paid $90k for a job that any millennial would gladly do (and do better) for $40k. Such is life.

5. On Writing In Cursive Teachers might not be showing kids how to write in cursive anymore, but is that really a necessary skill? Sounds like it could be something that is taught in an afterschool program or some kind of free course online. It’s certainly meaningless compared to having computer skills, which baby boomers somehow manage to get by without knowing how to accomplish even the simplest tasks. A large part of the job description for literally every millennial who has snagged an office job is to assist those being paid double our salaries with sending attachments in an email and printing a PDF.

Baby boomers have gained the reputation for being terrible parents. Perhaps their lack of internet access and hours wasted learning cursive writing is to blame for their poor parenting skills. They’re unhappy we’re glued to our cell phones, and then they’re unhappy when we don’t answer their phone calls immediately. The baby boomer generation might think their picketing efforts were revolutionary, which they were, but when millennials do the same, we’re “whining.” Perhaps it’s time that baby boomers mind their own business. They’re on their way out, dropping like flies, and it’s safe to say they’ve done enough damage to this country. Millennials are doing their best to clean up the mess they were left with, so maybe cut us some slack!