by Warren Michaels 4 years ago6 months ago

Donald Trump loves to brag. He’s Braggy McBragface. He lays it on so thick, his cultists can’t tell a fact from a lie anymore. He creates his own bubble of reality where if he says something enough times, it becomes certified Truth.

Here are ten of the dumbest, most outrageous, most assuredly WRONG boasts he’s ever made.

Where do I even start? In his earliest days as a businessman, he practiced segregation in his housing projects, not allowing blacks to be housed in developments alongside whites. After the “Central Park 5” were cleared of all charges, he declared publicly that he still believed them to be guilty. He’s been fined for racist practices at his casinos. He launched his presidential campaign by calling Mexicans “rapists,” criminals, and drug dealers.

He has an acute, and not at all hidden, fear of Muslims. He said during one of the debates that almost all Muslims hate the United States. One of his campaign promises was a ban on all Muslims entering the U.S., a policy he’s still trying to implement. He refused to condemn white supremacists after the Charlottesville riots (until public outcry demanded he do so). He later said there were “very fine people” on both sides of the riot, a very pointed statement that some neo-Nazis are A-okay with him. And then there’s those pesky “shithole countries,” a clear reference to South America and Africa.

His entire life shows an unmistakeable pattern of racial discrimination.

2. “Nobody has more respect for women than I do.” 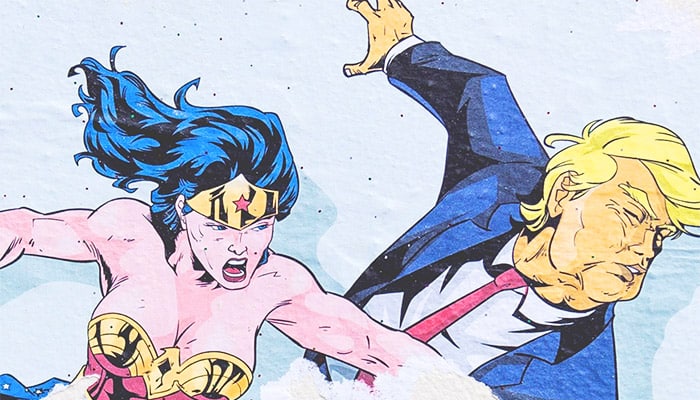 Oh, please. This statement is negated by absolutely everything Donald Trump says and does. Crack open a Bible sometime and you will see commands and modeled behavior that Donald Trump resembles in no way whatsoever.

He has zero humility. He has never displayed a love for humanity — just a preference for the ones he likes (rich white people). He has never put anyone else’s needs before his own. He has definitely committed adultery. He’s swindled and stolen money from gullible rich people who believed in his brand. He’s cheated on his taxes again and again. He lies as often as other people breathe in and out.

One of his major tenets of business is “turn the other cheek.” Sorry, no, that’s Jesus. What Donald says is “always get revenge.” Obviously, he doesn’t forgive those who wrong him, despite the Bible saying that “love keeps no record of wrongs.” By his own admission, he has never repented, because he believes he’s never done anything wrong. And he has done nothing to further the “Great Commission,” aka bringing lost souls into the Kingdom of Heaven.

4. “I have the world’s greatest memory.”

What this statement is missing is the word “selective.”

“I have the world’s greatest selective memory.”

Because Donald Trump only remembers that which is useful to him. Everything else he conveniently forgets.

There are endless court cases on file in which Trump has testified, under oath, that he doesn’t know or “barely remembers” former business partners and associates with whom he was deeply, deeply in bed with. (That’s a metaphorical bed in this case.) Many of those individuals, incidentally, were affiliated with the Mafia. Don’t believe me? Look it up. It’s all a matter of public record.

Like his sketchy career memory, he flip-flopped on major issues throughout the campaign — sometimes backing both sides of an issue on the very same day. He frequently makes outrageous statements on Twitter, and is later adamant that he “never said that” and “never would!”

Psychologists have suggested that his constant lying and contradicting himself is part of a psychological strategy used to make the rest of us question reality. I’m not convinced he deserves that much credit.

I’ve already addressed this one at length. His “best words” are some of the most idiotic and vitriolic ever uttered by a sitting President.

6. “Nobody builds walls better than me. Believe me.”

This may or may not be true, but what Trump has failed to mention time and again when bragging about his construction skills, is that he has often relied on Mafia connections and illegal immigrants for the labor.

If you’re thinking, “Those are serious allegations,” you’re right. That’s why in 1999, Trump settled a 15+ year court case with the undocumented Polish workers who built Trump Tower and worked under horrendous, unsafe conditions for very little money. This was not an isolated incident. Undocumented Latino workers were employed in the construction of Trump International Hotel in Washington, D.C. Trump has been involved in countless construction projects over the years; does anybody really believe these are the only times he used cheap, undocumented labor?

Come on. You can’t argue for the structural integrity of a “builder” who has none of his own.

7. “I think I am actually humble. I think I’m much more humble than you would understand.”

Your Twitter feed, Mr. President, would beg to differ.

Sorry losers and haters, but my I.Q. is one of the highest -and you all know it! Please don’t feel so stupid or insecure,it’s not your fault

I am the BEST builder, just look at what I’ve built. Hillary can’t build. Republican candidates can’t build. They don’t have a clue!

I am attracting the biggest crowds, by far, and the best poll numbers, also by far. Much of the media is totally dishonest. So sad!

Thanks- many are saying I’m the best 140 character writer in the world. It’s easy when it’s fun.

As long as I campaign and/or support Senate and House candidates (within reason), they will win! I LOVE the people, & they certainly seem to like the job I’m doing. If I find the time, in between China, Iran, the Economy and much more, which I must, we will have a giant Red Wave!

This kind of talk is hardly unique to his Twitter account. Whenever he opens his mouth, he’s either bragging, lying, or both.

Okay, let’s settle this “Ivy League school” thing once and for all.

But Trump’s puffed-up pride at his Ivy League education fails to mention that Wharton is best known for its post-graduate MBA program, so the implication when you say you “got the best education at Wharton” is that you earned a Master of Business Administration there.

Trump did not. He attended Wharton for just two years, transferring after two years at another, smaller college in New York. There, he earned a Bachelor of Science in Economics degree, which I concede is no small accomplishment for such a selective and prestigious school.

But his grandiose “Ivy League school” education is not the one he’s implying he has, or that which Wharton and the University of Pennsylvania are known and celebrated for. As for his frequent claims of having the “highest I.Q.,” no honors were listed on his degree, and despite what you may have heard, he did not graduate as Valedictorian.

9. “I am the most popular person in the history of the Republican Party. I beat Honest Abe.”

Oh so that’s why he could barely get a single conservative politician to endorse him at the Republican National Convention. Or why his administration is mired in endless scandals and controversies. And surely it’s his virtuoso way with words that continues to inspire party loyalty.

First, the very idea of being “popular” suggests that the presidency is a popularity contest. In Trump’s mind, it very much is. For him it’s less about approval and demographics and all that. It’s about how well he and his personal brand are known, and that everyone knows that he “wins” every day.

Second, assuming he was referring to approval ratings instead of strict popularity — and we have to assume because he never explained by what measurable metric he “beat” Lincoln (he never backs up his brags with evidence) — it’s a pretty darn big claim to boast that your approval is higher than the man considered to be the most respected and successful president of all time: Abraham Lincoln. Only Donald Trump could have an ego big enough to think he has somehow already “beaten” Lincoln.

Third, polls regarding a president’s approval are traditionally conducted by telephone. Mr. Trump apparently never learned from his “very highly educated” “high IQ” that the telephone was invented in 1876, eleven years *after* Lincoln was assassinated. There were no approval ratings in Lincoln’s time, it was systemically impossible.

Like most of what Trump says, this is just more bluster from a buffoon who’s madly in love with himself.

The way it’s worded, it sounds like he’s suggesting that having lots of money makes him cover model material for Vogue. But no, the context of this statement comes from one of his rambling interviews, where he was talking about how other presidential campaigns are paid for by lobbyists and private investors. In a sense, those candidates are “owned” by their investors; a little “you scratch my back…” So if elected, the candidate won’t be looking out for their constituents’ best interests as much as the interests of the back-scratchers.

Trump was insinuating that because he was financing his own campaign — a fact that’s been strongly disputed by claims that his company merely loaned him campaign money, and then he paid it back, so that he wound up spending very little out-of-pocket — he wasn’t owned by any investors. He was completely independent of special interest groups and rich individuals with their own agendas.

But is this true? Well, yes. No. Maybe sorta kinda.

Is Donald Trump very rich? He won’t release any financial statements, so we have no direct evidence of his wealth besides his possessions and lifestyle. There’s plenty of evidence that he’s not nearly as rich as he claims to be. Per usual, he’s very likely overstating his net worth, just as he had the floors at Trump Tower labeled with numbers ten digits higher than what floor they actually are (so the 18th level became the 28th Floor and so on) in order that the building would seem taller.

Then there’s the fact that while he claims to not have taken any major donations for his campaign, his election website had a “donate” button on it, and was more than happy to take individual contributions of any amount.

But most important of all is that his richness (or lack thereof) has very little to do with how much loyalty he owes to any special interest groups. The NRA, for example, spent $30.3 million out of its own very deep pockets, to help Trump get elected. Money never changed hands between the NRA and Trump; they merely spent money on advertisements for the candidate they preferred. Nice and clean.

Does he therefore owe them for his election victory? What do you think?

One more for the road:

11. “People love me. And you know what? I’ve been very successful. Everybody loves me.”

“Everybody” is a lot of people — probably more people than you could wrap your mind around. Kind of like the size of the ocean around Puerto Rico. (You were awfully surprised at the size of that, remember?) I assure you, I promise you, I swear to you on a copy of The Art of the Deal:

Everybody does not love you. Some of them surely do, and will follow you, holding banners high and singing your praises, all the way to Hell.