You’d think that, by now, the GOP would have been exposed for the hypocritical jerk bag convention that they so clearly are. And yet, they have somehow maintained the position in the United States as the party of moral rectitude and good Christian gentlefolk in every hill and dale. Considering the massive number of Republicans who have been charged with no only serious crimes by a multitude of sexual crimes—including pedophilia—you’d think that voters would begin to catch on.

“Hey,” they might say to themselves as they lovingly stroke their American-flag painted AR-15, “I don’t remember Jesus endorsing pedophilia. In fact, I seem to remember the bible being rather strict on the topic of sex outside of marriage with anyone. And didn’t he constantly encourage his followers to give up all the worldly possession they had to follow him, to not be distracted by material wealth because the wealth of heaven is so much greater? Golly, do you think I’ve been hoodwinked, Mr. Machine Gun?” The scales would fall from their eyes like brass from a shell extractor, and they would see the GOP for what it truly is: a bunch of under-qualified white men so used to holding power that the idea of granting a black person any degree of authority or autonomy is anathema. How dare their hallowed position as top dog be challenged!

The instances of GOP sexual misbehavior is quite lengthy, but we are only too happy to provide some highlights. And for those seeking proportional representation of Democrats and their sex crimes, 1) what are you doing reading a hatchet job on your political party of choice, and 2) Democrats don’t call themselves the party of God and country so it’s not nearly as hypocritical. 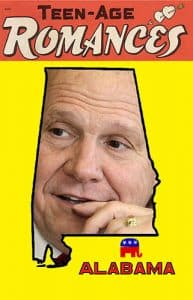 Of course, let’s start this hit parade with Roy Moore, the man that educated us all about the statue of limitation on sex crimes. When his perversions and disturbances were unveiled to the public, a truly disheartening number of people attempted to excuse his actions because they were a long time ago. Don’t you remember that glorious time thirty years ago when assaulting women was no biggie, mostly because women were (and are!) accepted as valid members of society with their own wants and feelings that can’t be trampled over by a man because he’s got a boner. So hey, give him a break.

I bet those ladies were asking for it anyway, I’m sure they insisted. It’s not like one of the women was only 14 when she was assaulted, or another was just 16! That’s basically full grown! That’s why we allow teenagers to drink, sign contracts, get tattoos, and purchase firearms, right? Oh wait, that’s literally the exact opposite of how it works? Yes, it is apparently possible to consent to sex with Judge Roy Moore before you’re old enough to get your braces off. What wonders will they think of next. Well, at least that guy didn’t get into office.

Nazis and Racists and Harassers, Oh My!

But being a Nazi is certainly no disqualification! I’m sure you recall the passages from the Bible where Jesus preached about how much better white Christians were than anyone else, and how discriminating against other people was totally chill. “The meek will be trampled by the wealthy,” I think it goes. So it’s no surprise to see a Steve West running for office after admitting “Hitler was right” about the “causes” of Germany’s economic problems: i.e., Da Joos did it. That guy actually won his primary in Missouri, so good job everyone for totally falling down on the job. You’d think that running against a racist was hard or something, as if maybe a huge number of Republican voters actually quietly endorse a less blatant version of racial supremacy. It’s just not something you say in mixed—ahem!—company.

We’ve also got Pat Meehan, someone so inept at sexual courtship that he had to bribe his way out of a failed romance—with government money, no less! I wonder if there’s a field for “bribes payed with government money” on your annual disclosure forms. Then we’ve got Mark Sanford, the governor of South Carolina who straight-up vanished for several weeks to pursue an affair with an Argentinian women. He lied to his staff about hiking the Appalachian Trail to cover his disappearance and didn’t even bother to call his family on Father’s Day. The party of family values, right there.

Chris Lee tried to impress a lady on Craigslist with pictures of him flexing, but the dope actually used his official congressional email AND REAL NAME for all his sexting. While running on a pro-life platform, Scott DesJarlais forced his ex-wife to get two abortions and tried to bully his mistress, who was a patient of his medical practice, into an abortion as well. Stand up dudes, all around.

And to top it all off, of course, you’ve got the King of the Dirtbags himself, Donald J. Trump, a man so damaged that he doesn’t think forcing himself on women is wrong because he’s famous. I’m sure Jesus would be proud, but then Donald would know: no one reads the Bible more than him, after all.