Through a small hole in his pocket, Alex Jones pricks himself with a needle that he didn’t take the time to sterilize.

The sharp pain feels small, finite, and contained. Yet he wields that pain, utilizing his sheer willpower to wash himself in the sensation.

From his eyes, he squeezes a tiny, salty tear.

“When you see … myself destroyed, remember Infowars, remember free speech.”

Of course, the First Amendment guaranteeing every American the right to free speech is a protection against censorship from the government. Private companies, such as Facebook, Spotify and Google, are entirely free to ban anyone from their platforms.

And yet, Jones pushes the needle just a bit further, unleashing another fat tear. It trails down the side of his cheek.

“Give us water, give us your prayers and we will fight hard,” he said (really), imploring his followers to send him money.

“Give us your love and support, like sunshine on our faces, backs and our chests to make us strong.

Another tear falls, but this time, it’s genuine. He thinks about how hard he’s worked to achieve all he has. How he’s built up InfoWars from the ashes of his own fiery outrage, inciting violence where it’s undeserved, convincing the masses to believe in conspiracy theories spun from his wildest dreams. And even successfully vilifying the grief-stricken parents of murdered toddlers. All this accomplished, yet now tossed asunder.

The needle’s still puncturing, but he can’t even feel it anymore.

That Sandy Hook Stuff You Heard About

Most notoriously, Alex Jones is known for peddling his conspiracy theory that the mass shooting which took place in Sandy Hook Elementary School in 2012 never actually happened. The shooting resulted in the deaths of 20 six to seven year-old children, in addition to 6 adult members of the school’s faculty. 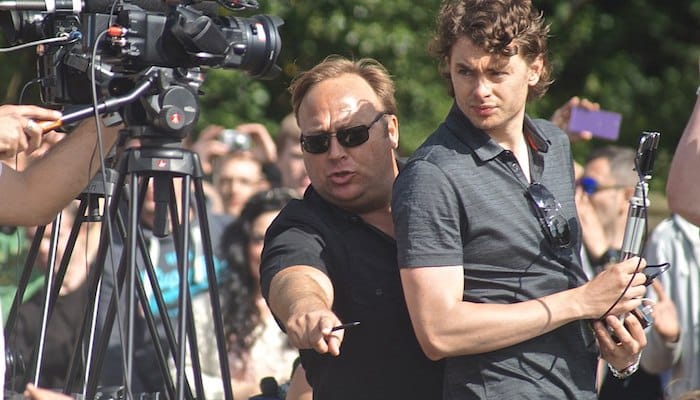 As a result of Jones’ conspiracy theories peddled on his influential alt-right shows, the grieving parents have had to endure a dearth of harassment from Jones’ followers. Death threats forced one set of parents to move homes seven times within the space of five years.

“I would love to go see my son’s grave and I don’t get to do that, but we made the right decision,” said the mother. Her son, age 6, died in Sandy Hook.

Since the horrific tragedy, families of the children have experienced little respite. Jones’ accusations — based on easily disproven theories — have been relentless. Indeed, Jones even showed his audiences maps directing them to various addresses associated with the families of those impacted by Sandy Hook.

On his radio show, Jones has agonized over quotes from the parents, pinpointing irregularities in their recollections. Otherwise, he relied on common distortions characteristic of videography to ‘prove’ that the families are nothing more than actors on sets.

And to what end?

As a crisis actor himself, Jones admitted to fabricating the stories.

In an extended rant on his InfoWars platform, Jones confessed: “I’ve been telling the parents for years I believe their children died, and quite frankly, they know that. I’m sorry they died, but I didn’t kill them and gun owners in American did not kill your children,” he continued. “I believe Sandy Hook happened.”

And yet, despite telling the parents this for years, Jones has continued to peddle his damaging conspiracies which have only served to torment those already living through a hellish tragedy.

Interestingly, none of this is why Facebook, Spotify, and Google decided to drop the crisis actor from their platforms.

Rather, it was his violation of hate speech policies, his incitement of violence, and — when he was temporarily banned for these things, his circumvention of said ban by appearing on other channels’ feeds.

Although many of these social media platforms previously stood behind Jones, defending his right to freedom of expression, the swift about-face occurred across them all, as one. Once one platform banned him (Apple/iTunes), all of them quickly decided that it was no longer banning Jones that would be controversial, but keeping him.

After all, it is a social media platform’s responsibility to uphold its own standards: to foster communities void racism, homophobia, and calls for violent retribution.

Predictably, Jones responded to hammer of justice with hysteria.

“I told you this was coming, they used military tactics and now the tech giants are all working in consort against the American people,” he said on Twitter (one of the only platforms he’s still allowed on, temporary ban not withstanding).

With sincere urgency befitting only the most experienced, classically trained crisis actors, Jones continued: “Everyone must make memes about Apple and Google and everyone must lift Infowars up as a standard to be defended and saved.”

With memes as our only salvation, Jones prays to his closely-held God for deliverance. Somewhere, in the Heavens above our earthly skies, God boots up his outdated version of Adobe Photoshop and gets to work. 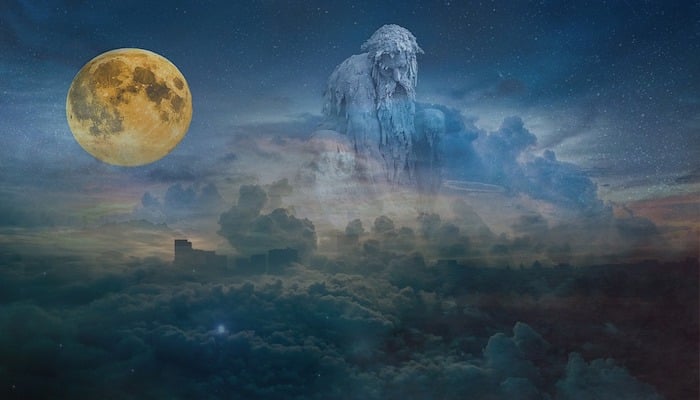 His legions of followers now truncated by Jones’ sudden invisibility, the crisis actor has to learn new lines. Because now he, personally, is the victim, screaming into a void now so much farther away from the chaos he himself created.

In the moments before the camera will start rolling, he takes a breath. He applies a thin layer of foundation across his cheeks and forehead. Not too much though — his audience believes him more when his face flushes bright red, and when the veins bulge all across his face. Somehow, they think it’s proof of his passion, and his veracity.

In his head, an impending rant is a horde of bees, suppressed until, finally, he will free it.

Because though he may be cut down to a sliver of his former glory, he will not be a victim.

“I’m a victim!” Jones bellows. “And my show is the most censored in the world! Because I know who your enemies are. Here, do you want their addresses?”