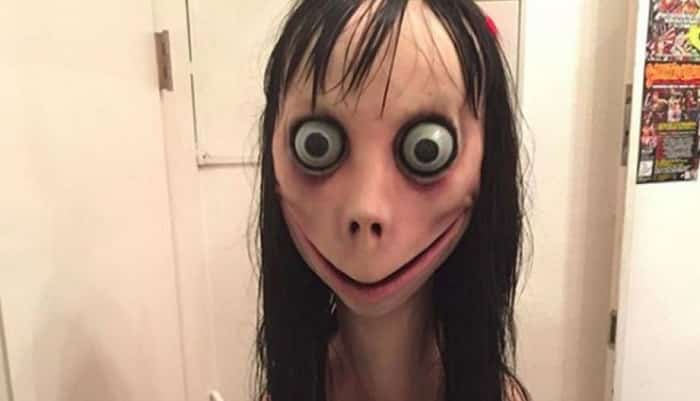 Never underestimate the twisted nature of the internet, the birth place of nightmare-inducing creations such as Slenderman, The Russian Sleep Experiment, and The Expressionless. Still, the latest creepypasta to go viral has managed to take the scare factor to another level, combining urban legend with suicide.

Dubbed Momo, the half-human/half-bird hybrid is said to be terrorising Whatsapp users with her bulging eyes, long black hair and sinister smile. The figurehead of an alarming new suicide game, Momo’s disturbing viral challenge has allegedly made its way to the phones of young people and encouraged a 12-year-old girl to kill herself.

The legend began on the r/creepy sub-reddit, after a user posted the image of what is supposedly Momo to the site. The spooky snap went viral, and at some point apparently turned into a suicide game.

To join the game, people text an anonymous number via Whatsapp. The account then sends users grostesque, manipulative messages and sets dangerous challenges, the end result of which is suicide. Supposedly, Mexico, Argentina, Germany and France have all been victims of Momo’s Machiavellian behaviour.

Like Slenderman, who was created by Eric Knudson as part of a Photoshop contest in 2009, Momo was never intended to cause any harm. In fact, the avatar that has been circling the web was stolen from Japanese doll artist Midori Hayashi, who has nothing to do with the viral game in question.

The Momo game grabbed the attention of the mainstream media after a teenager was found hung from a tree in her back yard near Buenos Aires, Argentina. Before committing suicide, the girl supposedly had a conversation with Momo via Whatsapp, and after searching her phone police are questioning an 18-year-old the teen met online.

Police said in a statement: “The phone has been hacked to find footage and WhatsApp chats, and now the alleged adolescent with whom she exchanged those messages is being sought.”

They suspect the girl’s plan was to upload the video of her death to social media as part of the Momo challenge.

More people have since come forward, saying Momo sent them violent images during the night and threatening to curse them while they slept. Others claim that they received horrifying phone calls where all they could hear were screams and other nightmarish sounds down the receiver.

Argentian authorities are now warning young people to avoid adding any accounts with the Momo avatar on social media, but it’s not the first online suicide game to go viral.

Earlier this year, The Blue Whale challenge was credited with the deaths of over 130 young people in Russia. The game set daily tasks for users to complete within 50 days, which gradually became more extreme, with the final task ordering them to take their own life. And in 2014, two 12-year-old girls in Ohio were jailed for stabbing their friend 19 times, supposedly to appease the creepypasta Slenderman.

Reddit Points Out How Ridiculous (and Dangerous) Tide Pod Challenge Is