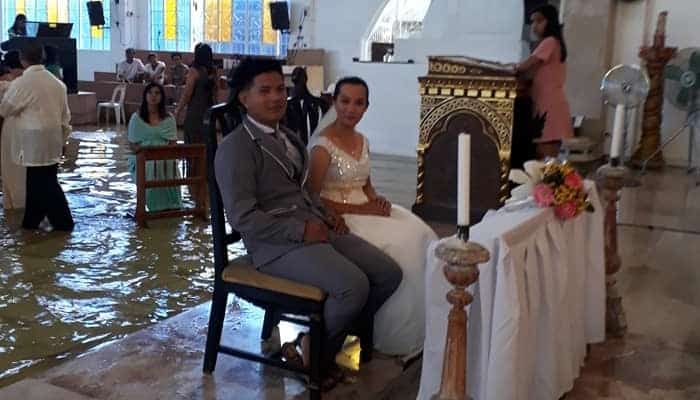 You know that old adage that love conquers all? Well, it might be true, love is a powerful thing indeed, just take a look at teenagers, for example, powerful urges those kids have but I digress. Also, some American rock band named after an eagle once made a song saying “love will keep us alive.” Perfect song for a wedding by the way.


That song is probably one of the many playing in the heads of a recently married couple in the Philippines. The said couple Jeff and Jobel got married in a flooded church amidst a storm. So yeah, the couple did not let the storm rain on their parade, their marriage might have also had a stormy beginning, but nevertheless, it was successful from a technical perspective. Here is the video of the ceremony:

Now, for those of you wondering why they did not just reschedule the wedding, well, wedding services in the Philippines are not exactly triple-A companies with good investment insurance. Once you have paid for the catering, the church rent, apparels, and everything else, you’ve got no choice but to continue the ceremony, otherwise the services you bought are forfeit and getting refunds is more difficult than getting the in-laws’ blessing.

It just so happens that Jeff and Jobel’s wedding was gatecrashed by a storm. No car even wanted to transport them through the storm, so they had to ride a boat to get there, the flood was high enough for those anyway. Hence, they had no choice but to continue the wet and wild ceremony. One thing is for certain, though, their love for each other is deeper than that literal flood they had to endure just to get married.