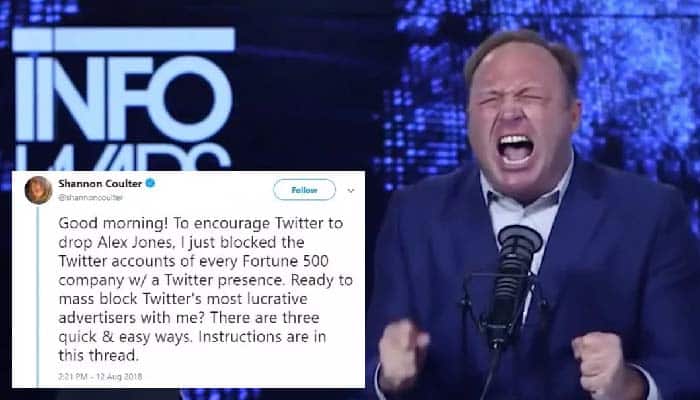 Despite being booted off a number of platforms including YouTube, Spotify, iTunes and Facebook, Alex Jones is still active on Twitter. This is despite widespread outrage from people who don’t think free speech covers spreading debunked rumours that 9/11 was an inside job or the Sandy Hook massacre was a hoax, both of which Jones has claimed in the past. The anger only intensified after CEO Jack Dorsey said the alt-right radio personality had not done anything to violate the site’s guidelines, despite banning Milo Yiannopoulos for dodgy behaviour back in 2016.

Still, Twitter users aren’t taking this lying down. In the age of online petitions and hashtag activism, people are putting their accounts where their mouth is and refusing to endorse fake news and hate speech.

So, in protest users are hitting the micro-blogging company where it hurts – in the advertising department.

Twitter users can control what pops up on their timeline, so if you don’t like someone, you can block or mute their posts. That includes accounts that are shelling out extra for ads.

This clever new protest, dubbed #BlockParty500, is encouraging users to block Twitter advertisers across the board in the hopes it will pressure the site into deleting Jones. There is even a handy blocklist to make the process easier.

The protest is the brain-child of Shannon Coulter, creator of Grab Your Wallet – a similar project that helps customers to avoid companies that profit from the Trump Administration – along with her political writer pal Jeff.

Good morning! To encourage Twitter to drop Alex Jones, I just blocked the Twitter accounts of every Fortune 500 company w/ a Twitter presence. Ready to mass block Twitter’s most lucrative advertisers with me? There are three quick & easy ways. Instructions are in this thread.

The thread includes a number of guides on how to block the platform’s most lucrative advertisers. Shannon also provides a blocking tool that she created herself, which blocks all the accounts in one go, saving you time and effort. If Jones is removed from Twitter, the same tool will also automatically unblock all of these accounts for you.

If you’re thinking that #BlockParty500 is just another well-meaning hashtag to viral without actually making an impact, Shannon assures users that “even if you only blocked the top 25 to 50, that would have an impact.”

Then go to “Settings & Privacy” in your Twitter account. Select “Blocked Accounts” on left. Select “Advanced Options” & “Import a List.” Select “Attach a File to Upload” then choose the CSV file. When Twitter drops Jones, you’ll have to manually unblock the companies one by one.

The hashtag is rapidly gaining traction, with over 20,000 Twitter users now taking part.

At ~ 5pm Pacific today, we passed the 20k mark. That’s 20,230 people who have now told Twitter: either lose Alex Jones or your biggest advertisers will continue to lose access to our time & attention. ? ?? #BlockParty500 #GrabYourWallet

#BlockParty500 so easy and so satisfying!

That literally took about 5 seconds of effort. Thanks for explaining why one should do it, and for making it easy.

Done! Good riddance! Any company that supports the vile work of Alex Jones will never have my patronage

Gift-giving isn’t just a seasonal affair between friends, families and acquaintances. The art of gift-giving is also conducted on a national scale with countries often sending each other big, weird and expensive gifts. Experts in all things gifts, Vanilla Reindeer put together some examples of these expensive and odd gifts that have been shared between… END_OF_DOCUMENT_TOKEN_TO_BE_REPLACED

There are lots of ways you can make Pres. Trump feel welcome: you can offer him coffee, or mow a penis into a field for him to view as his plane lands. The willie in question has been chopped by Born Eco ahead of the arrival of President Trump, who visited the UK Monday for… END_OF_DOCUMENT_TOKEN_TO_BE_REPLACED

The year isn’t even halfway over, yet Donald Trump has managed to make a fool of himself and our country countless times. From inviting the national college football champions, the Clemson Tigers, all the way to the White House for some McDonald’s to his to the dreaded results of Mueller’s investigation, it has been one… END_OF_DOCUMENT_TOKEN_TO_BE_REPLACED

Republicans have always said that when they gained control in Congress, they would work to overturn Roe v. Wade and here they are, cashing in on that promise one state at a time. So far, Alabama, Arkansas, Georgia, Kentucky, Missouri, and Ohio have all passed incredibly restrictive laws on abortions, making it illegal for women… END_OF_DOCUMENT_TOKEN_TO_BE_REPLACED

If you’re on Snapchat, then you’ve probably played around with (and were likely horrified by) their filter gender swap filters. While you’re probably using these filters to send hilarious pics to your friends, some guys using them to create Tinder profiles. What likely started out as a joke has quickly evolved, and these guys are… END_OF_DOCUMENT_TOKEN_TO_BE_REPLACED

“Milkshaking” is a hilarious trend in Britain where a milkshake is thrown at and ideally lands on a far-right politician or activist. The point of this nonviolence protest is to humiliate them without causing injury. Physical injury at least. There’s no doubt that milkshaking has led to a few bruised egos. Not only is this… END_OF_DOCUMENT_TOKEN_TO_BE_REPLACED