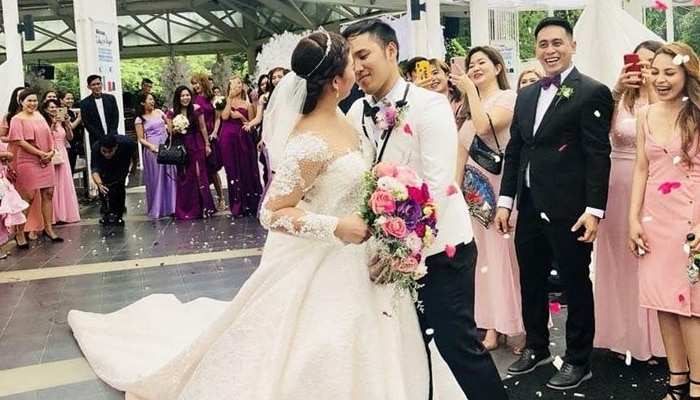 Weddings, the part of your life which can either go extremely smooth or extremely awkward. We can ignore anything in between. The point is, lots of things can happen at a wedding, making them quite a maelstrom of embarrassing, happy, lovely, sad, and of course, romantic moments. Weddings in the Philippines are no different, the majority of the population is Catholic, meaning lots of things can go wrong at weddings.

A newlywed couple from the said country recently became a viral sensation because of their wedding ceremony. They did something which a lot of guests– and now the internet, would never forget. No, we are not talking about the “I do” moment or the kiss. The two of them actually passed out drunk during the party. Here they are before:

And here they are after:

Hell of a way to start a marriage, drunk with no recollection that they got married, well, maybe. One thing is for certain though, both are going to be nursing one mean hangover at the honeymoon. It was actually the groom, named Jomer Balila who uploaded the pictures along with some videos of people having to carry both of them to their service car:

The bride, Bianca Esguerra, was so passed out she had to be carefully carried into the car. Meanwhile, Jomer was no better and was found lying on the grass face down with what appears to be vomit:

Despite this, the two were not embarrassed at how incapacitated they were at their wedding. Jomer even shared a Facebook status saying:

Our Perfect Happy Wedding with an Epic Ending

“The couple that Wal Wal together, Stays Happily forever”

“Wal wal” is a slang for intoxicated or getting drunk in the Philippines. That is surely one way to end a wedding, the two are also now in the Maldives for their honeymoon.

This Doggo Upstaged His Humans on Their Wedding Day, But It’s Ok Because He’s Adorable