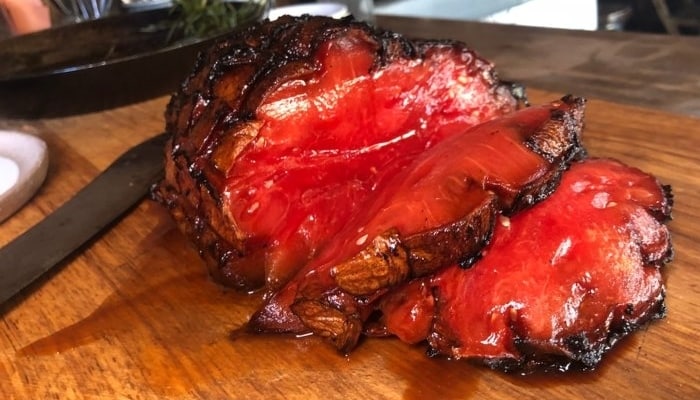 Every so often vegans usually come up with some bizarre but commendable alternative to meat dishes. One example is the thing called Tofurky which, as you may have guessed, a substitute for turkey made from tofu. There are also the usual veggie burger or veggie sausages which apparently taste like the real thing. So you can bet that there is certainly vegan steak. Before we get to that, here is a vegan black metal chef, proof that vegans have all the alternatives you need:


So regarding the new type of steak, it is actually not made from meat or meat alternative products. Instead, it is made out of watermelon. I know right? Water they thinking?! I mean, what were they thinking? Well, apparently, one restaurant from New York City specializes on making such culinary wonders. The restaurant is named Duck’s Eatery and they serve smoked watermelon steaks at $75 per watermelon. Here’s a feature about it below:

Anyway, according to the reviewer, it certainly does not taste like steak. Quite an odd thing to serve considering that the restaurant made the dish in an effort to cater to more vegetarian guests who like steak. In that regards, why not just give them some actual steak meat alternatives?

Unsurprisingly, the internet is not all too keen on welcoming the watermelon ham/steak to the culinary world. Some even lament the cost of the thing, which, at $75 is allegedly too expensive for a watermelon gimmick. However, it certainly is a rare medium of cooking, as long as it is well done, then let’s not roast the restaurant too much.

Watch This Guy Pour Molten Aluminum Into A Watermelon [Video]

The Blood Test, The Swab Test, and The Saliva Test      Essentially, there are three general types of COVID-19 testing produced so far. One is the rapid test, the second is the saliva test and the other is the swab test. The rapid test (also known as the anti-body test) uses blood samples. The swab test… END_OF_DOCUMENT_TOKEN_TO_BE_REPLACED

The COVID-19 pandemic is one of the biggest modern pandemics known in history. Currently, there are more than five million confirmed cases in the world, with a total of 333,000 deaths. A total of 1.6 million of these confirmed cases are in the US alone. The world is currently in a race of finding a… END_OF_DOCUMENT_TOKEN_TO_BE_REPLACED

Despite concrete data and research, people’s opinions will always be diverse when it comes to a variety of topics including religion, politics, gender, and more. Denial is a common reaction to many important discussions and serious world events. The COVID-19 pandemic does not differ from any issues and is subject to opinions from critiques all… END_OF_DOCUMENT_TOKEN_TO_BE_REPLACED

Back in January, when the Wuhan, China coronavirus broke out, it didn’t make it to the front page of newspapers, in print or virtual form. Today, January feels like a lifetime away. Like it or not, people around the world have adapted to the new normal – staying at home, frequent hand washing, and social… END_OF_DOCUMENT_TOKEN_TO_BE_REPLACED

Since the beginning of the year 2020, the whole world has been stupefied by the rapid spread of a deadly coronavirus known as COVID-19. World superpowers in the West were unable to prevent the virus from reaching their borders. Because of this fact, the novel coronavirus COVID-19 became a world-wide pandemic no less than three… END_OF_DOCUMENT_TOKEN_TO_BE_REPLACED

For months since the start of 2020, the attention of the world has focused on immediate response efforts to contain and combat the novel coronavirus, also known as COVID-19. The deadly virus has pushed millions of people into isolation.  This kept people in their homes for weeks and months away from their work, their friends,… END_OF_DOCUMENT_TOKEN_TO_BE_REPLACED