by James Kosur 11 years ago2 months ago

I can’t possibly express in words how much I hate getting in the crossfire of an hour long Twitter conversation among people I follow. Oftentimes I get confused by the conversations or my timeline looks like a one way conversation and that’s where startup Chitty Chat comes into play.

Created by @mhsutton Chitty Chat allows users to join private chat rooms by simply tweeting a request for one.

Notice that I put the person I wanted to join the chat into the tweet (@Techobsessed – my personal account) and then I added in @Chitty_Chat which tells the Chitty Chat system to send me a personal chat room link, less than one minute later I received the following message: 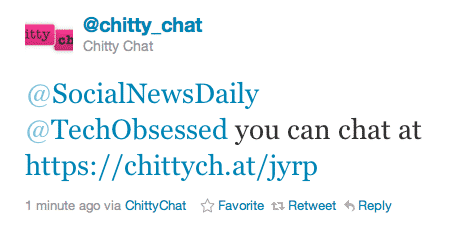 I then clicked on the link in the message sent from Chitty_Chat to enter the private chat room. Since the chat room is private and only those people I invited can access the channel I logged into my @Techobsessed account from another browser to test the program and I was asked to first authorize the Chitty_Chat program through my Twitter account, thus ensuring that only those people who I asked to join the conversation were able to do so, avoiding onlookers who simply choose to click the publicly made available link. 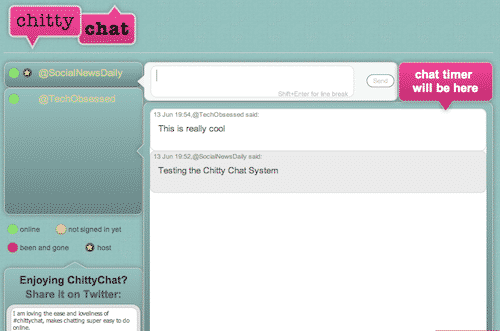 It should be noted that there are no character limits in Chitty Chat and the program is still in Beta testing which means there may be some bugs, although my testing went as planned.

Take a look at the program by visiting Chittych.at or by starting your own chat room by inviting your friends along with the @Chitty_Chat name in your Tweet.