Thousands took to Twitter to share their thoughts on President Obama’s second inauguration yesterday under the hashtag #inaug2013 and broke the microblog in the process. Many users reported frequent outages and downtime throughout the day on Twitter.

We experienced indefinite freezes on Twitter at around 5pm yesterday with both Google Chrome and Firefox, though our Twitter iOS apps seemed to work fine. Services like TweetDeck and HootSuite seemed mostly unaffected, though our refresh button got a workout while using those clients, if you know what I mean.

The hashtag #inaug2013 was the top trending hashtag pretty much all day.

Twitter confirmed the outage on their blog, writing “Some users may be experiencing issues accessing Twitter. Our engineers are currently working to resolve the issue.”

Several hours later (around midnight), Twitter updated its blog saying that the issue had been resolved.

Still, many users were upset that it took 6-7 hours for Twitter to get things moving again, and that they pretty much observed radio silence during the outage.

Update: This incident has been resolved.Not very informative for seven hours of service disruption.techcrunch.com/2013/01/21/twi…

Okay fine, that last one was just me complaining about Inauguration Day. Not for any political preference, I just wanted to participate.

Data on Inauguration Day hasn’t been fully released by Twitter yet, so we don’t know if we’re looking at any record-breaking numbers for #inaug2013. Twitter’s blog did report that they saw 5x the normal amount of tweets-per-second and about 4x the amount of tweets-per-minute at Inauguration Day’s peak (which they put at around noon) with mention of a possible “2-5 minute delay receiving updates” at that time. 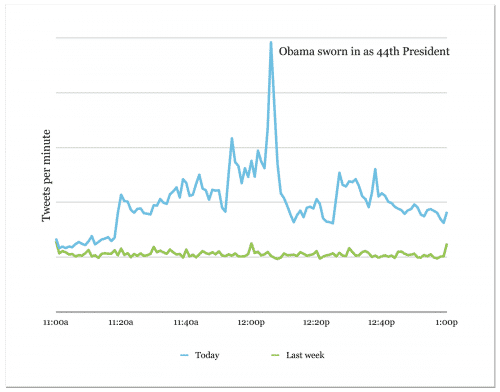 Nothing on the late day outage though. We’ll keep you posted.

Did you experience Twitter outages on Inauguration Day? Did you tweet about President Obama’s inauguration with the hashtag #inaug2013? Sound off!