Branch is just one week out of closed beta testing and already the platforms engineers have developed a new feature. The systems new recommendations offering is seen when a user visits the homepage and showcases information from people you know.

The recommendation engine shows up in your stream and includes people you follow on Twitter, the title of the Branch they are in and a small selection of posts from people who are engaging with the topic displayed.

As TechCrunch points out:

“It’s a fairly basic tool, and looks to just be grabbing content from anyone you’re following on Twitter, regardless of the nature of the discussion compared to what you yourself are talking about on Branch. But it’s a step in the right direction to better content discovery, which is something that could make Branch a much more broadly engaging tool.”

Branch programmers admit that upon launch the recommendations “won’t be perfect” but they hope to better the platform as it progresses. Typically recommendation based engines require large amounts of data to be collected before they can properly utilize that data in meaningful ways.

Do you think Branch can turn itself into a content discover tool that engages on a more meaningful level with its users? 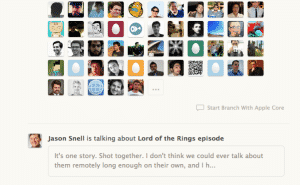