You might think that Trump buys his suits off the rack at Marshalls. Unbelievably, they are in fact custom-tailored.His suits are rumored to cost as much as $50,000, with the careful attention of a master tailor. Yes, the conclusion is unaviodable: Trump’s suits are supposed to look the way they do. Yes, he has in fact sought out that J.C. Penny’s fat-kid’s-first-funeral suits. So what gives?

Well, first of all, Trump’s body has what you might call an unfortunate shape. If we were being less charitable, we might say he looks like a bag of soggy suet shoved inside a cooler. Ironic, considering Trump’s penchant for cutting and superficial judgments of the female figure. For a man who demands that every woman look and dress like his daughter Ivanka (you know, the one he says he wants to screw), his own appearance hardly measures up.

Trump could lose some weight. He’d surely look more presidential. And he would likely look less like an actor performing a role he’s ill-suited to. In fact, our analysts conclude that if Trump were less offensive looking, his approval rating might be as much as two points higher. But no, he persists in looking like a sweaty, raccoon-eyed nectarine left on the counter past its prime.

That’s just not a body shape you can salvage, no matter how much sharkskin you wrap it in. Despite his tailor’s heroic efforts, Trump will never look good in or out of a suit. And his puddle break doesn’t help much.

Yet it seems that Trump goes out of the way to make it worse. Witness that he literally never buttons his suit while standing, the kind of faux pas that Trump would gesture at rudely. Or examine his hilariously long ties, which must be custom-made to have such an obscene length when worn. So what gives? We can really only speculate about what Trump thinks he’s doing, but here’s our sartorial thoughts on the matter. Our documentary crew created this detailed dramatic reconstruction of the day in question.

As in all things, Trump’s understanding of fashion is about as deep as flooded baking sheet. But if his pattern from the rest of his life holds, Trump believes that he knows everything there is to know about men’s fashion. He is, if nothing else, a walking example of the Dunning-Kruger effect. He probably saw an animated GIF on Twitter said vertical lines make people look slimmer. After Trump asked Mike Pence which direction vertical is again, he realized (in a flash of insight truly astonishing for an intellectual of his caliber) that ties are basically vertical lines you tie to your neck. That’s when Trump had the sartorial brain-baby that he never questioned: wearing a long tie would make him look slimmer. 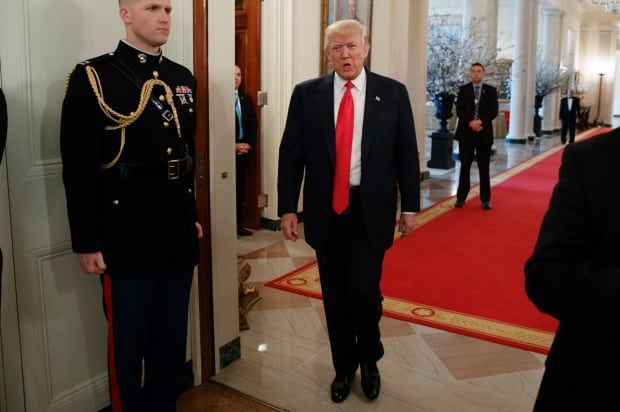 Unless you’re blind (lucky devil), you know that Trump’s tie choices offer no refuge from his engorged bulk. But this strategy brings a problem of its own. Trump cannot close his suit. With a four foot tie, Trump could never reasonably button his suit jacket. A good foot of tie would poke out the bottom, and Trump would look even more like a misplaced eight-grader than he does normally. So his suits are tailored to be left open, even when he’s standing (a MAJOR faux pas there, my dudes). So Trump constantly fidgets with his jacket, pulling it closed in front of him for pictures. Of course, his also has the effect of making him look like he’s about to attend a bar mitzvah. It’s not much of a win.

So the answer to our question: Trump looks bad because he wants to look bad. He’s doing it on purpose, folks. It’s a classic Trump strategy: dress like a garbage bag of warm coleslaw to own the libs.