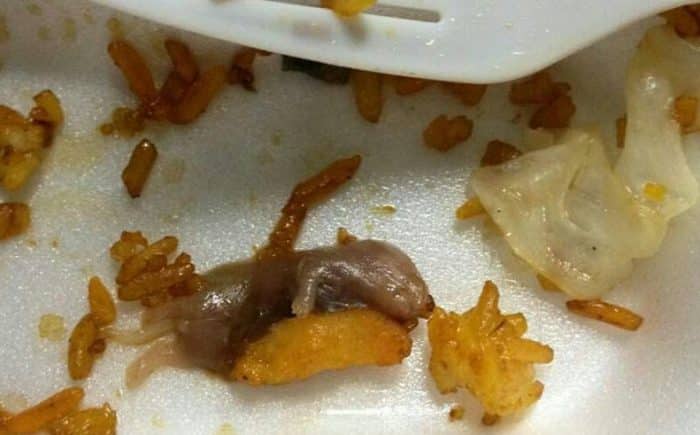 A man who ordered take-out Chinese for supper got a true surprise when he opened his box of fried rice, and then ended up in the slammer.

Antwaun Boyd, 25, who earlier this week ordered food from China Xpress, was arrested by Stamford Police Thursday after purportedly finding a fried mouse in his rice prior to punching one of the restaurant’s employees, Sgt. Robert Shawinsky said.

The loopy story started after Boyd and his grandmother said they unsealed the fried rice and dumped it out only to discover a fried mouse mixed in with the rice, police stated.

Astonished, and irate, Boyd and his grandmother went to the restaurant on Selleck Street to complain and return the rice, Shawinsky said.

According to what Boyd said to police, the employee analyzed the rice and removed the mouse to demonstrate there was no rodent inside the carton. A fight then ensued between restaurant employees and Boyd who was joined by several acquaintances, police spoke.

Wei Hou, 35, a manager and cashier and manager at China Xpress, alleges he suffered a broken nose and broken collarbone and required stitches. Hou said he intends to contact a lawyer about a potential lawsuit against Boyd.

”Not only are we being assaulted, but at the same time, we’re being slandered by something that’s not true,” said Hou, who opened China Xpress with his brother rougly 8 years ago.

“This is going to cause a lot of damage to our business. We’ve been serving the neighborhood over eight years. It’s devastating seeing my wife come to the hospital and seeing me beat up. I have two kids I need a job for. Now I have to be off for the next couple of months.”

Police said Boyd slugged Hou in the face, triggering other kitchen employees to join the brawl and strike the men with spoons.

Boyd and his buddies fled the scene, leaving his grandmother at the restaurant where the cops said an employee hit her with a wooden spoon.

”There was blood all over,” said Hou. “You don’t want stuff like that to happen. I want justice.”

Just this week, lawmakers approved a bill establishing the District of Columbia (D.C.) as the 51st state of the United States of America. This is after multiple calls and protests from the citizens to finally consider D.C. as a state.  However, the bill is not out of the woods yet as it faces multiple oppositions… END_OF_DOCUMENT_TOKEN_TO_BE_REPLACED

John Bolton’s new book entitled ‘The Room Where it Happened’ had been stirring up quite the attention since it was announced for release last week. Officially released only June 23, the new book seems to threaten the Trump administration as there had been moves to get it unpublished. The request was later on turned down… END_OF_DOCUMENT_TOKEN_TO_BE_REPLACED

Learning about the Juneteenth Holiday The Juneteenth holiday, celebrated every 19th of June, is a commemoration of the liberation of enslaved African-Americans in the United States. It was on the 19th of June 1865 when Union Army General Gordon Granger announced General Order No. 3 in Galveston, Texas officially emancipating slaves in the entire state.… END_OF_DOCUMENT_TOKEN_TO_BE_REPLACED