This Doggo Upstaged His Humans on Their Wedding Day, But...

Most brides are concerned about being upstaged by a well-dressed guest or the maid of honour, not their dog. Nevertheless, that’s exactly what happened to newly-wed Angie Bloomberg.

Angie and her fiance Jayce Conway had planned for their beloved dog, Boone, to be the best man at their wedding, which took place last Tuesday in Big Sky, Montana. Instead, the six-year-old labrador retriever decided to steal the show with an epically timed pupper photobomb that has now taken over the internet.

Speaking to Today, Jayce joked: “He’s a really well-trained dog. I planned for him to stand between me and my brother. Boone was technically the best man, but he couldn’t really give a speech so I thought I should give my brother a shot.”

Initially, it looked like Boone was going along with the plan. However, when Angie started walking down the aisle, Boone was so excited he ran to greet her (Awh!). Then, when the vicar began the opening prayer, it became pretty obvious to all in attendance that Boone wasn’t in the mood to sit quiet and listen.

Or, as Jayce put it: “Boone got a little bored and decided to roll around in front of everyone.”

Fortunately, this priceless moment was caught on camera by the couple’s friend Chris Davies. After the ceremony, Chris shared the snap online, where it went viral for obvious reasons. 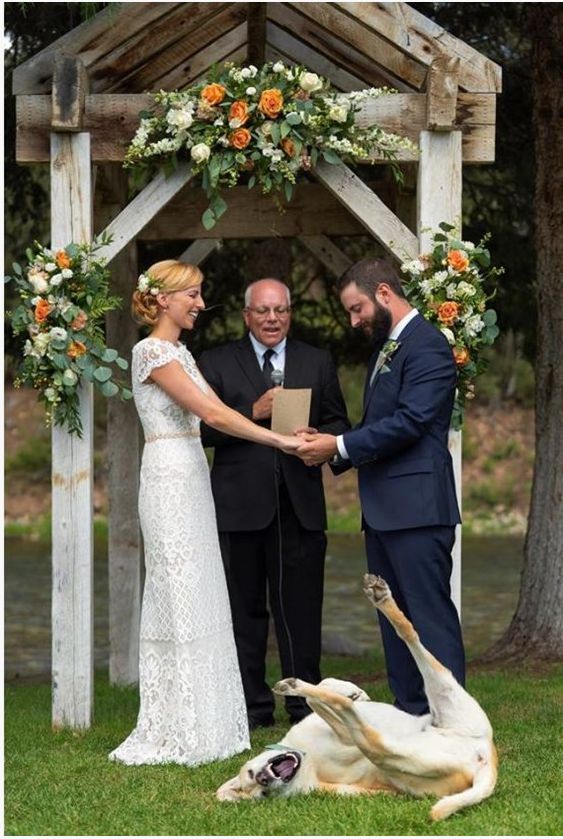 He’s just so happy for his mom and dad!

And now, the web is in love with Boone and his show-stopping antics

He was enjoying the service

Adorable. That’s the one they should use for their thank you cards. ?

So funny. Definitely one of the family

Beats having children in weddings every time.

The dog is so happy!!

We hope he enjoyed the reception as much as the ceremony!