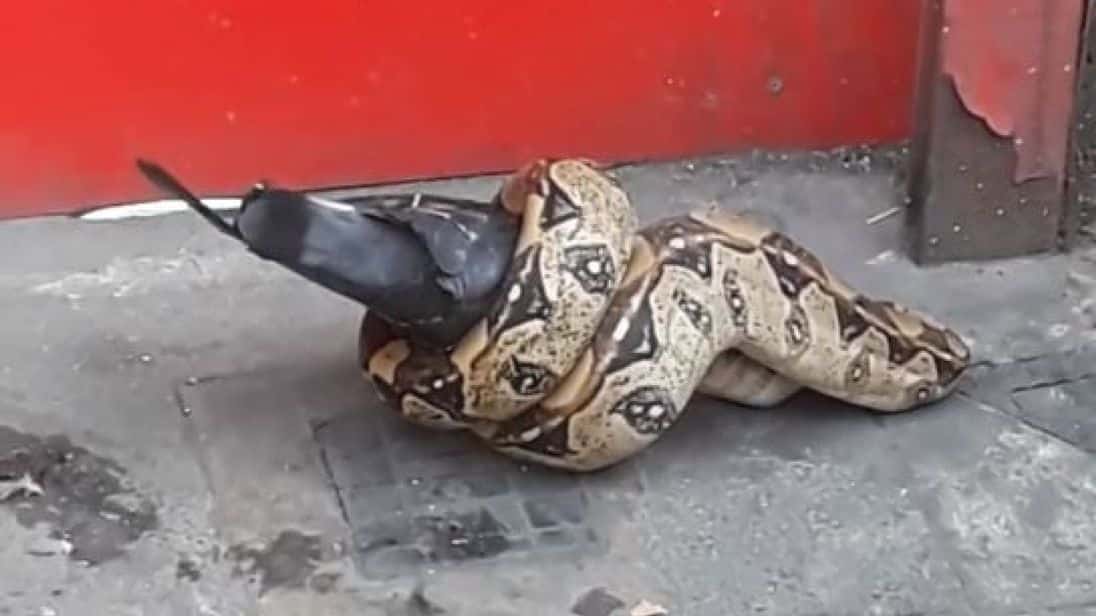 A python speculated to be an escaped pet was recorded munching on a pigeon at the side of a busy road in London.

The RSPCA said witnesses phoned animal collection officers to the vivid scene Saturday on Leytonstone High Road in London when the python was spotted slithering across a road and devouring a pigeon.

“We received a call yesterday morning reporting a stray snake in High Road, Leytonstone. I arrived to find the python in a box and transported him to a wildlife center where he is currently being assessed,” RSPCA inspector Rebecca Bedson stated to the London Evening Standard.

Rescuers stated the pigeon is believed to have already been deceased and was handed to the snake by bystanders.

“I’m very keen to find out how he came to be in such a dangerous situation. Exposed like that on a street could have meant anything might have happened to him, he could have been run over by a car or attacked by another animal,” she expressed.

“It might be that he is an escaped pet, or more worryingly, someone may have deliberately dumped him and left him to fend for himself,” Bedson added.

Along with birds (hint the footage), pythons will feed on wild animals such as caiman (small alligator-like animals), lizards, antelope and monkeys.

The bigger the meal, the longer it takes to digest. Due to this, a python may only need to eat 4-5 times a year.

Snake Falls Out Of Banana Tree, Wraps Around Man’s Arm

The Blood Test, The Swab Test, and The Saliva Test      Essentially, there are three general types of COVID-19 testing produced so far. One is the rapid test, the second is the saliva test and the other is the swab test. The rapid test (also known as the anti-body test) uses blood samples. The swab test… END_OF_DOCUMENT_TOKEN_TO_BE_REPLACED

The COVID-19 pandemic is one of the biggest modern pandemics known in history. Currently, there are more than five million confirmed cases in the world, with a total of 333,000 deaths. A total of 1.6 million of these confirmed cases are in the US alone. The world is currently in a race of finding a… END_OF_DOCUMENT_TOKEN_TO_BE_REPLACED

Despite concrete data and research, people’s opinions will always be diverse when it comes to a variety of topics including religion, politics, gender, and more. Denial is a common reaction to many important discussions and serious world events. The COVID-19 pandemic does not differ from any issues and is subject to opinions from critiques all… END_OF_DOCUMENT_TOKEN_TO_BE_REPLACED

Back in January, when the Wuhan, China coronavirus broke out, it didn’t make it to the front page of newspapers, in print or virtual form. Today, January feels like a lifetime away. Like it or not, people around the world have adapted to the new normal – staying at home, frequent hand washing, and social… END_OF_DOCUMENT_TOKEN_TO_BE_REPLACED

Since the beginning of the year 2020, the whole world has been stupefied by the rapid spread of a deadly coronavirus known as COVID-19. World superpowers in the West were unable to prevent the virus from reaching their borders. Because of this fact, the novel coronavirus COVID-19 became a world-wide pandemic no less than three… END_OF_DOCUMENT_TOKEN_TO_BE_REPLACED

For months since the start of 2020, the attention of the world has focused on immediate response efforts to contain and combat the novel coronavirus, also known as COVID-19. The deadly virus has pushed millions of people into isolation.  This kept people in their homes for weeks and months away from their work, their friends,… END_OF_DOCUMENT_TOKEN_TO_BE_REPLACED