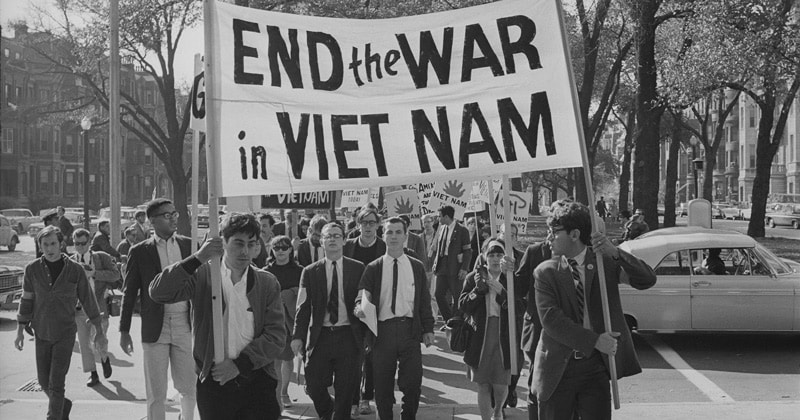 Media and government falsehoods were responsible for one of the bloodiest wars in US history and it all began 54 years ago today in the Gulf of Tonkin.

It’s said, one of America’s fiercest wars in history, Vietnam, commenced after the United States had been attacked in the Gulf of Tonkin in the South China Sea. Though, over the past 54 years, a torrent of info and government officials have come forward indicating that mostly everything the media and the government told Americans about the Gulf of Tonkin was a falsity.

In the 2003 documentary The Fog of War, the former U.S. Secretary of Defense Robert S. McNamara confessed that the August 4th Gulf of Tonkin attack never occurred.

In 1995, McNamara visited former Vietnam People’s Army General Võ Nguyên Giáp to ask what transpired on August 4, 1964 in the second Gulf of Tonkin Incident. “Absolutely nothing”, Giáp countered. Giáp asserted that the attack had been fictional.

According to the widely contradicted official story, on 2 August 1964, the destroyer USS Maddox, while conducting a signals intelligence patrol as part of DESOTO operations, was hunted by 3 North Vietnamese Navy torpedo boats of the 135th Torpedo Squadron. The North Vietnamese torpedo boats then ambushed with machine gun fire and torpedoes.

Two days later, according to the confirmed story, on 4 August 1962, the NSA reported that a second Gulf of Tonkin incident happened and United States ships were assaulted once again.

The next day, without probing, on 5 August 1964, the NY Times reported “President Johnson has ordered retaliatory action against gunboats and ‘certain supporting facilities in North Vietnam’ after heightened attacks against American destroyers in the Gulf of Tonkin.”

In 2010, more than 1,100 transcripts from the Vietnam era were disclosed, validating officials and Congress raised serious doubts about the intel fed to them by the White House and the Pentagon.

Now, even retired military officials are even warning us about more staged events to suck us into war.

“I think the president needs to watch carefully for the potential for something like the Gulf of Tonkin incident,” Col. Macgregor stated.

“Many of your viewers may not remember that it never happened and we could very well be treated to something like that in the Gulf. We should watch for that, and this is an example of President Trump’s comments on fake news, he should not be sabotaged by fake news.”

The Story Behind the Infamous Vietnam Execution

The Blood Test, The Swab Test, and The Saliva Test      Essentially, there are three general types of COVID-19 testing produced so far. One is the rapid test, the second is the saliva test and the other is the swab test. The rapid test (also known as the anti-body test) uses blood samples. The swab test… END_OF_DOCUMENT_TOKEN_TO_BE_REPLACED

The COVID-19 pandemic is one of the biggest modern pandemics known in history. Currently, there are more than five million confirmed cases in the world, with a total of 333,000 deaths. A total of 1.6 million of these confirmed cases are in the US alone. The world is currently in a race of finding a… END_OF_DOCUMENT_TOKEN_TO_BE_REPLACED

Despite concrete data and research, people’s opinions will always be diverse when it comes to a variety of topics including religion, politics, gender, and more. Denial is a common reaction to many important discussions and serious world events. The COVID-19 pandemic does not differ from any issues and is subject to opinions from critiques all… END_OF_DOCUMENT_TOKEN_TO_BE_REPLACED

Back in January, when the Wuhan, China coronavirus broke out, it didn’t make it to the front page of newspapers, in print or virtual form. Today, January feels like a lifetime away. Like it or not, people around the world have adapted to the new normal – staying at home, frequent hand washing, and social… END_OF_DOCUMENT_TOKEN_TO_BE_REPLACED

Since the beginning of the year 2020, the whole world has been stupefied by the rapid spread of a deadly coronavirus known as COVID-19. World superpowers in the West were unable to prevent the virus from reaching their borders. Because of this fact, the novel coronavirus COVID-19 became a world-wide pandemic no less than three… END_OF_DOCUMENT_TOKEN_TO_BE_REPLACED

For months since the start of 2020, the attention of the world has focused on immediate response efforts to contain and combat the novel coronavirus, also known as COVID-19. The deadly virus has pushed millions of people into isolation.  This kept people in their homes for weeks and months away from their work, their friends,… END_OF_DOCUMENT_TOKEN_TO_BE_REPLACED