Women Can’t Even Share Their Stalker Stories Without Being Hit...

A story recently went viral about a woman who was being followed while walking on the street. She cleverly approached another woman, begging her to pretend to be her friend. Screenshots from the woman’s tweet have been making its rounds all over Instagram and Facebook describing the incident: 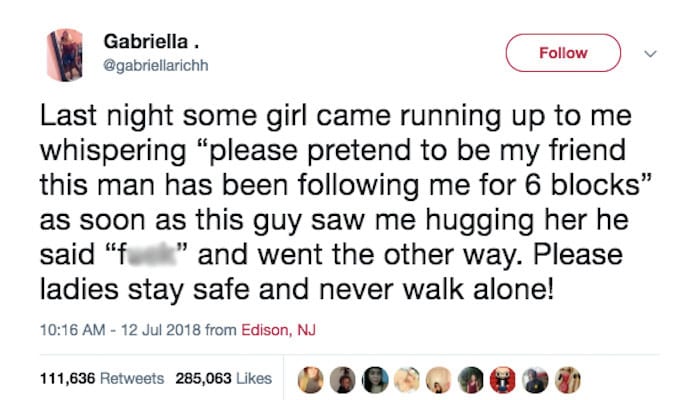 The response to this story has been overwhelming, and women are responding by publishing their own stalker experiences. Each one can be viewed as a warning, but more importantly, they’re an eye-opener for the men who read them. At least some of them. When they aren’t responding with the most ignorant hashtag in existence, #NotAllMen, they’re actually starting to recognize all of the shit women are put through on a daily basis. Like not being able to walk down the street without our lives being in danger. Here’s a look at some of their stories.

Women Can’t Even Walk Their Dogs In Peace

Imagine a life where we could all walk our dogs around the neighborhood without being harassed by some guy driving by. This woman shared her frightening experience about a man who not only followed her but got out of his car to pursue her on foot as well:

When will these guys realize that shouting at women on the street isn’t flattering? It’s creepy as hell. When women ignore you, don’t yell louder. We’re ignoring you because we’re nervous and attempting to avoid confrontation. This woman was also stalked while walking her dog, but fortunately, her dog scared him away. At least this creeper kept his perverted ass in his car.

Men see young girls as easy targets, and this one shared a relatively common stalker story. At least one that is commonly told in ’70s murder mystery documentaries or those old school videos they show kids in schools after a local kid gets kidnapped. Beware of vans. Don’t take candy from strangers. Or puppies.

I know, I know. #NotAllMen. But could this guy have been any more cliche with his creepy stalker van? This girl is seriously lucky to be alive.

Ladies Can’t Even Get Tipsy Around Guys Anymore

It’s almost like a signal goes off whenever women are out having a few drinks at a bar. Like a bat signal but for perverts. The drunker a lady is, the more appealing they are for those targeting them. Any woman who has stepped into a bar has likely experienced something like this. Maybe not to such that degree, but females know when they’re being targeted.

On a girls holiday, I’d been left by my friends, so I was drunk & crying as I was walking back to my hotel. a delivery guy tried to force himself on me and push me into his van. I got him off, he drove down the road and jumped out and tried again. Luckily I fought him off!

A horrifying experience, to say the least. And men wonder why we’re resistant to their crude advances after the sun goes down. Our instincts tell us to flee, otherwise, we might end up being thrown in the back of a stranger’s van.

Ladies Are Lending A Hand To Those In Need

Aside from sharing stalker stories, women are also sharing their stories about times they helped a woman in need. Whether they saw them being followed and warned them, or acted as a friend to women who seemed in need of assistance, they’re sharing a very important message. If you see one of your fellow chicas in need, step in!

I did that once in a bar when a stalky dude wouldn't leave me alone and I was starting to panic. I pulled up a chair next to a random woman and asked her to pretend she knew me. She did (and we've been good friends ever since).

Naturally, the conversation turned to the extent women go to just to stay safe. We lie about having boyfriends. We run into the arms of strangers. We even run and hide. These guys are all about making sure we know that #NotAllMen are stalkers and perverts, while we’re busy trying to make sure we don’t get killed just for walking down the street by ourselves.