Anna Burns Welker, the wife of Patriots receiver Wes Welker, was a little disappointed after her husband’s team lost to the Baltimore Ravens last night. Anna took to Facebook to vent about her frustration and ended up writing a few highly critical messages about Ray Lewis.

Lewis, who will be retiring at the end of this year, has been highly praised by the media this season as he lead the Ravens toward a Super Bowl.

Anna, however, doesn’t believe that the future hall of famer deserves any of that praise.

“Proud of my husband and the Pats. By the way, if anyone is bored, please go to Ray Lewis’ Wikipedia page. 6 kids, 4 wives. Acquitted for murder. Paid a family off. Yay. What a hall of fame player! A true role model!”

The comment was deleted but the Big Lead was able to grab a (blurry) screen grab of the post. 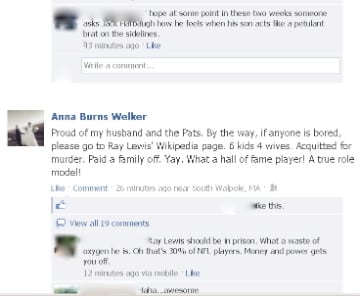 A scroll down Ray Lewis’ wikipedia page shows that the linebacker was arrested and charged for the murder of Richard Lollar on January 31, 2000. The charges were eventually dropped as Lewis reached a plea deal that gave him a year probation for a misdemeanor obstruction of justice charge.

It’s been more than a decade since the Ray Lewis murder trial but Anna Burns Welker, as well as several other Patriot fans, haven’t quite forgotten about the stain on Lewis’ legacy.

To all the people that think Ray Lewis is a role model. He has six children by four women and he was involved in a murder #justsomefacts

I haven’t seen Ray Lewis this happy since he got away with murder.

What do you think of Anna Burns Welker’s criticism of Ray Lewis?