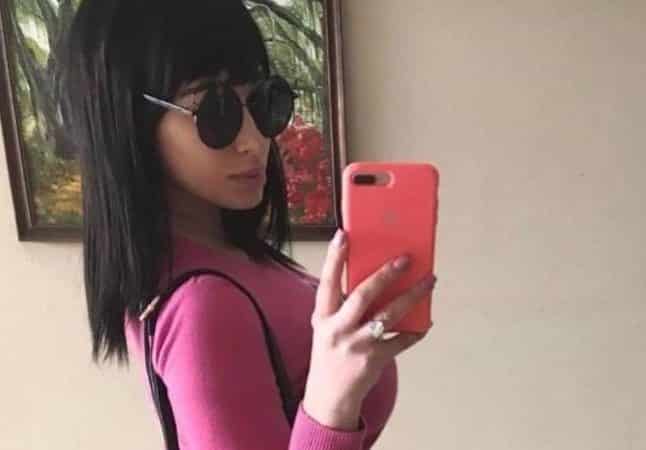 A 24-year-old woman from London has illuminated us on the day-to day hardships she endures because of the 34JJ artificial breasts she procured to look like US reality TV star, Kim Kardashian.

Aside from implants, the woman too had a Brazilian “butt lift,” hair removal and lip fillers, spending nearly $20,000 in total.

Nadia Sofia Nahir, who in London works as a project assistant, has disclosed that she chose to have her breasts augmented at the age of 20, boosting her cup size to EE.

3 years later she had a second breast enlargement, to reach 34JJ, and even journeyed to Belgium for the operation, which turned out to be her most pricey treatment yet ($5,200).

Nahir, who depicts herself as a ‘growing goddess’ on her IG account, where she goes by the nickname nadiabarbie, explained her effort to look like Kim Kardashian. She hailed the KUWTK as a “modern goddess”; she also noted her own Argentinian heritage as a reason for the modifications.

“Back in Argentina there are competitions like “Miss BumBum” and “Miss Reef”, which celebrate curvy, fit models. The attention they seemed to get fascinated me. They’re looked at as goddesses who grab the eyes of everyone in the room. ‘They’ve all had procedures done, breast implants and bum enlargements. It’s part of the culture,” Nahir told the local newspaper.

Though despite the positive feedback and encouragement she gets from her Instagram followers, Nahir’s much-craved curves sometimes give her difficulties, as there are some things she can not do as a result of it.

“Sleeping or lying on my front I can’t do anymore or running over a short distance. I also try not to use the Underground (the Tube) much now and especially not at rush hour times,” she informed the outlet.

How did he die? An African American man, George Floyd, 46, was killed by Minneapolis Police officers. Floyd was being investigated for forgery. George Floyd’s death was caused by a police officer holding him down on the ground with a knee on his neck. He was not shot to death but instead strangulated. Now, his family… END_OF_DOCUMENT_TOKEN_TO_BE_REPLACED

The Blood Test, The Swab Test, and The Saliva Test      Essentially, there are three general types of COVID-19 testing produced so far. One is the rapid test, the second is the saliva test and the other is the swab test. The rapid test (also known as the anti-body test) uses blood samples. The swab test… END_OF_DOCUMENT_TOKEN_TO_BE_REPLACED

The COVID-19 pandemic is one of the biggest modern pandemics known in history. Currently, there are more than five million confirmed cases in the world, with a total of 333,000 deaths. A total of 1.6 million of these confirmed cases are in the US alone. The world is currently in a race of finding a… END_OF_DOCUMENT_TOKEN_TO_BE_REPLACED

Despite concrete data and research, people’s opinions will always be diverse when it comes to a variety of topics including religion, politics, gender, and more. Denial is a common reaction to many important discussions and serious world events. The COVID-19 pandemic does not differ from any issues and is subject to opinions from critiques all… END_OF_DOCUMENT_TOKEN_TO_BE_REPLACED

Back in January, when the Wuhan, China coronavirus broke out, it didn’t make it to the front page of newspapers, in print or virtual form. Today, January feels like a lifetime away. Like it or not, people around the world have adapted to the new normal – staying at home, frequent hand washing, and social… END_OF_DOCUMENT_TOKEN_TO_BE_REPLACED

Since the beginning of the year 2020, the whole world has been stupefied by the rapid spread of a deadly coronavirus known as COVID-19. World superpowers in the West were unable to prevent the virus from reaching their borders. Because of this fact, the novel coronavirus COVID-19 became a world-wide pandemic no less than three… END_OF_DOCUMENT_TOKEN_TO_BE_REPLACED