How Did We Never Notice This Huge Harry Potter Plot...

First there was that whole Harry Potter reboot thing circling Reddit, and now there’s yet another plot hole for us to wrap our heads around. Seriously Reddit, why do you do this to us?

This particular plot hole has made the rounds on the internet before, but it’s back again – probably because it’s such a big one.

In the post, Potterhead gardenburger points out: “HOW COME WHEN HARRY GETS BITTEN BY THE BASILISK IN CHAMBER OF SECRETS THAT DOESN’T DESTROY THE HORCRUX IN HIM SOMEONE ANSWER THIS???”

To which dark-dionysian-nsfw replies: “Because… because… shit. Can we get JKR on the phone?” 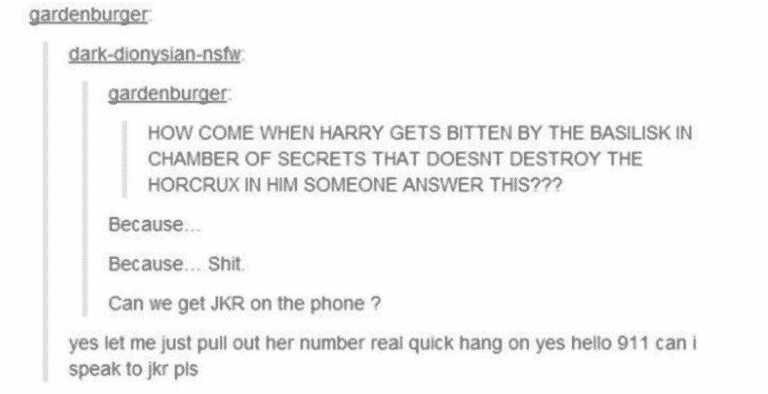 They may not have had her phone number, but fans did manage to get the J.K Rowling to answer their queries on Twitter. When questioned why the horcrux wasn’t destroyed, the author responded: “The Horcrux-receptacle has to be destroyed BEYOND REPAIR, so Harry would need to have DIED. #pleaseneveraskmethatoneagain“.

Nevertheless, this wasn’t enough for uber fan Hannah Anderson, who wouldn’t let it drop. “But what about the resurrection stone from the ring that still worked even after its horcrux was destroyed?” she asked.

J.K replied: “The crack in the stone was irreparable. Only Dumbledore cd have extracted the soul fragment but left the original charm intact.”

Still, some fans weren’t so easily persuaded, with one asking: “Why was the crack in the stone irreparable? After all, it was a STONE, a material object.. that’s what repairo is for.”

And it looks like they may have caught her out, as we’re still waiting on J.K’s response on that one.