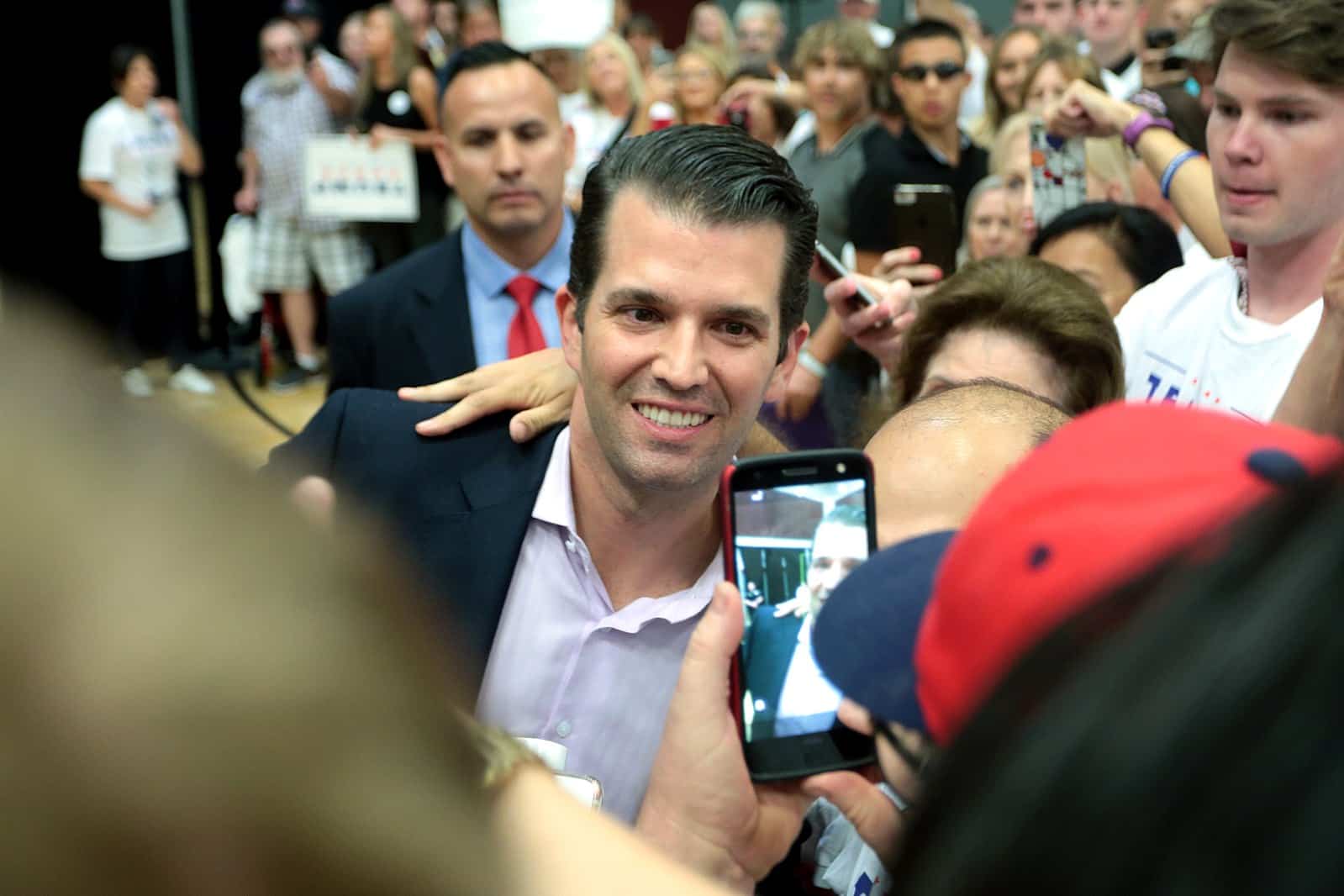 Donald Trump Jr. has never seemed like the brightest of the Trump bunch. Sure, he’s no Eric Trump, who is so perfectly satirized on SNL as a vacantly-staring child. Little Donnie Junior performs a little bit better than that, but we shouldn’t consider that particular high praise. The Trump family contains few luminaries, which is all the worse for both their family and our country at large. But one thing Donald Trump Jr. does have is a gaping hole where his heart should be. And its a hole that he desperately tries to fill with the conditional love of his father.

Yes, Donald Trump Sr. loves his daughter Ivanka so much that it’s damn creepy. He’s basically told the press that, were she not a blood relative, he’d be all up on that piece. It’s all the more creepy considering how much he flat-out ignores his other daughter, Tiffany Trump. But imagine that your Donald Trump Jr., bearing your father’s name but not his love or affection. How deeply you might yearn to have your figure comment on by your Dad during a national press interview. However cringe-inducing, however disgusting, you would likely swell with pride if your father called you “hot” at the Miss Universe competition. As Trump said of Ivanka on the Howard Stern show:

“You know who’s one of the great beauties of the world, according to everybody? And I helped create her, Ivanka…. She’s 6 feet tall, she’s got the best body. She made a lot money as a model—a tremendous amount.”

Imagine the immeasurable sadness of Donald Trump Jr. to waste away in her comely, sexy shadow. What might that drive a man to do?

Apparently, just about anything.

Donald Trump Jr. has a verifiable history of trying desperately to impress his distant father. Based on their relationship and email communications, Junior brags to his father about anything that could conceivably be classified as a victory, no matter how small. He went through all the trouble of setting up an illegal meeting with a Russian national promising compromising information on then-opponent Hillary Clinton. I’m sure he beamed with pride to tell his father all about how valuable he was being. Oh, never mind, actually he didn’t tell his Daddy about his biggest coup to date. We know that because, you see, election law would forbid it. And the Trump family is totally definitely not about breaking the law when its personally profitable or convenient.

We can also consider the Donald J. Trump Foundation, which Donnie Junior had the ignominy of managing. It’s a charity that Big Donnie treats like a regulation-free piggy bank, filled with money from people who want favors from the family. The same charity that is under investigation by the feds for supplying money to political causes in violation of their specialized non-profit entity tax status. It couldn’t possibly be the case that Junior committed several ethical violations and (probably) criminal acts in attempting to service his father’s insane goal of attaining the presidency. There’s no way someone like Donald Junior, who is a fully formed adult that doesn’t require the respect of his distant father figure for self-esteem, would do something so obviously immoral and siphoning off charitable funds for other purposes.

A Billion Other Controversies

The number of reprehensible and questionable things Little Donnie has done in an attempt to secure his father’s love is long and varied. They include maybe agreeing with the “white genocide” conspiracy theory, actively cooperating with WikiLeaks to secure information beneficial to his father, and calling liberal congressman Maxine Waters a stripper. Oh, and he also described refugees as murderous Skittles, so there’s that. And then he retweeted Rosanne Barr, saying that George Soros, evil magician, was a “nazi who turned in his fellow Jews 2 be murdered in German concentration camps & stole their wealth.”

If that doesn’t secure his father’s adoration, then I don’t know what will.