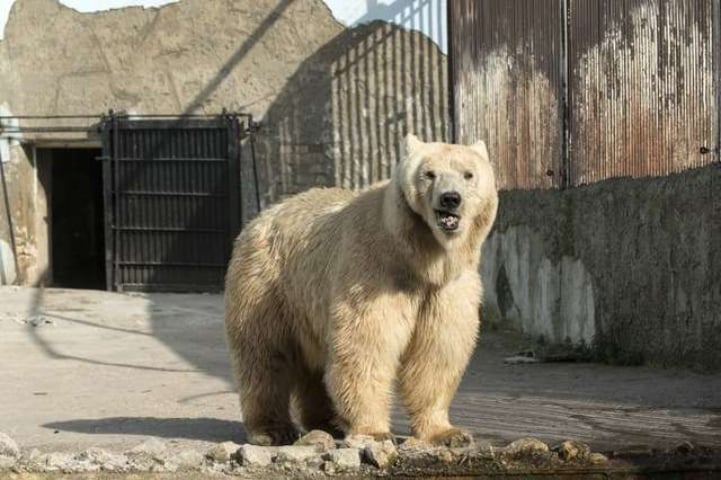 Those circus animals which look so happy during on-stage performances have a lot of sad and cruel stories behind the entertainment they bring. Only recently in human history has society began the humane treatment for such creatures, and that includes bears which are common circus performers. So bear with us as we tell the story of Napa, the last Serbian circus bear.


Napa’s life is something us humans would consider unbearable– no pun intended, he spent most of it behind a cage. In fact, until now, he has never experienced his natural habitat. Napa was born in a zoo and was given to a circus in Serbia. However, Napa’s circus career went to an end when Serbia banned the use of wild animals in circuses. Because of this, Napa was sent back to a zoo with cramped living quarters and substandard facilities. One would think that his suffering was over.

It was only until recently in the early weeks of July that a wildlife foundation named FOUR PAWS International and a sanctuary named Arosa Bärenland rescued poor Napa from his zoo dungeon. The journey took Napa from Serbia to Switzerland in a span of 900 miles and 28 hours of travel.

There, the 1,200-pound-bear was introduced to a sprawling new natural habitat. He was also given a bath and groomed to remove years of accumulated dirt on his bear coat.

Napa had never seen such a wide view his entire life. Though he will probably take a while before he becomes used to the new environment. The best part was that he can finally see the sky! Napa is now truly and finally, a free bear with all his bear necessities fulfilled.

Gift-giving isn’t just a seasonal affair between friends, families and acquaintances. The art of gift-giving is also conducted on a national scale with countries often sending each other big, weird and expensive gifts. Experts in all things gifts, Vanilla Reindeer put together some examples of these expensive and odd gifts that have been shared between… END_OF_DOCUMENT_TOKEN_TO_BE_REPLACED

There are lots of ways you can make Pres. Trump feel welcome: you can offer him coffee, or mow a penis into a field for him to view as his plane lands. The willie in question has been chopped by Born Eco ahead of the arrival of President Trump, who visited the UK Monday for… END_OF_DOCUMENT_TOKEN_TO_BE_REPLACED

The year isn’t even halfway over, yet Donald Trump has managed to make a fool of himself and our country countless times. From inviting the national college football champions, the Clemson Tigers, all the way to the White House for some McDonald’s to his to the dreaded results of Mueller’s investigation, it has been one… END_OF_DOCUMENT_TOKEN_TO_BE_REPLACED

Republicans have always said that when they gained control in Congress, they would work to overturn Roe v. Wade and here they are, cashing in on that promise one state at a time. So far, Alabama, Arkansas, Georgia, Kentucky, Missouri, and Ohio have all passed incredibly restrictive laws on abortions, making it illegal for women… END_OF_DOCUMENT_TOKEN_TO_BE_REPLACED

If you’re on Snapchat, then you’ve probably played around with (and were likely horrified by) their filter gender swap filters. While you’re probably using these filters to send hilarious pics to your friends, some guys using them to create Tinder profiles. What likely started out as a joke has quickly evolved, and these guys are… END_OF_DOCUMENT_TOKEN_TO_BE_REPLACED

“Milkshaking” is a hilarious trend in Britain where a milkshake is thrown at and ideally lands on a far-right politician or activist. The point of this nonviolence protest is to humiliate them without causing injury. Physical injury at least. There’s no doubt that milkshaking has led to a few bruised egos. Not only is this… END_OF_DOCUMENT_TOKEN_TO_BE_REPLACED